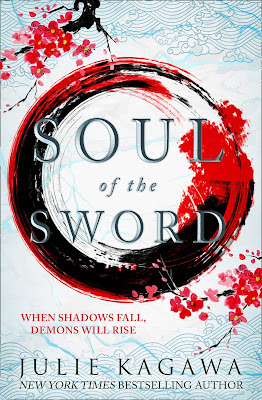 THE TIME OF THE WISH APPROACHES…

Yumeko the shapeshifter had one task: take her piece of the ancient and powerful scroll to the Steel Feather temple and prevent the summoning of the great Kami Dragon. But she has a new enemy now. The demon Hakaimono, has escaped and possessed the samurai she thought would protect her, Kage Tatsumi of the Shadow Clan.

Hakaimono has done the unthinkable and joined forces with Genno, the Master of Demons, to break his curse and set himself free. But Genno wishes to overthrow the empire and cover the land in darkness. To do that he needs only one thing, the scroll Yumeko is hiding. As the paths of Yumeko and the possessed Tatsumi cross again the entire empire will be thrown into chaos.

AND CHAOS WILL DARKEN AN EMPIRE.

Return to Julie Kagawa’s beautiful and perilous land of shapeshifters, samurai and demons as Japanese mythology and magic swirl together in the New York Times bestselling author’s brand new adventure.

Review:
Soul of the Sword is the second book in the Shadow of the Fox series and picks up Yumeko's story almost immediately where the previous book left off. Tatsumi has been possessed by the demon Hakaimono and no longer has control of his own body, instead he is trapped deep inside his own mind and forced to watch as the demon uses his body to do unspeakable things. Yumeko knows she has to protect the remaining piece of the Dragon Scroll at all costs but at the same time she is determined to rescue Tatsumi even if that means putting her own life in danger.

I'm going to be honest and say I didn't enjoy this book quite as much as Shadow of the Fox, I missed Tatsumi's character and I felt there were times when the story lagged a bit, but it's still a strong instalment to the series and it definitely left me eager to get my hands on a copy of the final book asap.

Julie Kagawa really excels with her world building here, I love her use of Japanese mythology and all the different types of creatures she has introduced us to in this series. The different yokai & kami, the sword fights and the magic all combine into a fairly action packed story that kept me turning the pages. While I missed Tatsumi and the relationship he has with Yumeko I did find it interesting to see some of Hakaimono's point of view and I love Okame, Daisuke and the others who add a little light hearted fun to the story. Don't let the fooling around lull you into a false sense of security though, there is danger all around and the ending was a shocker!