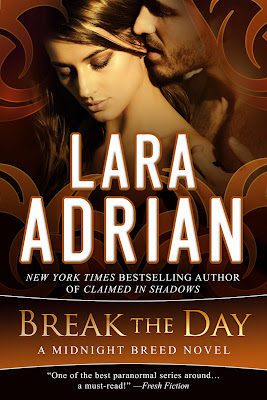 After a shocking betrayal nearly killed him and the people he cares about the most, what Breed warrior Rafe wants more than anything is revenge against the insidious brotherhood called Opus Nostrum. But to achieve that goal, he must turn his back on the Order and infiltrate a dangerous gang with ties to Opus. Risking everything to redeem himself and carry out his deep-cover mission, Rafe will let nothing stand in his way--least of all his desire for one of the loyalists he should despise, a mysterious, dark-haired beauty named Devony Winters.

But Devony has secrets of her own to protect, as well as a personal duty she will do anything to fulfill. And as a daywalker passing herself off as human to the gang she's been embedded with for months, the last thing she needs is a dangerous former member of the Order unraveling all her hard work. Her plans depend on keeping Rafe at arm's length, but if she surrenders to the dark need he stirs within her, it will be her heart that pays the ultimate price.

Review:
I was so excited when I found out this was Rafe's book. I love his parents (Tess and Dante from book 2 in the series, Kiss of Crimson) and I've liked what we've seen of his character in the last few books so I was curious to meet the woman who would steal his heart. Rafe is still reeling from the betrayal he suffered in the previous book and it's made him more determined than ever to help the Order bring down the Opus Nostrum terrorist group. So much that he's agreed to go undercover and he's even let his entire team believe that he was kicked out of the order and has gone over to the dark side to do it. Rafe's task is to infiltrate a group of criminals that the Order believe has ties to Opus and to try and get more information.

Rafe immediately suspects there is something off about one of the gang's members. Devony just doesn't quite fit the profile and that has nothing to do with how attractive he finds her. Devony actually has her own reasons for infiltrating the gang, she lost everything in the London attacks organised by Opus and she's going to do whatever it takes to avenge her family and stop the terrorists from destroying more lives. When secrets are revealed the two agree to work together but Rafe is still holding back and it could end up costing him everything.

Break the Day was another fab instalment in this series, lots of action and some progress made against Opus Nostrum but more than anything I loved the steamy romance between Rafe and Devony. I also really like that we now have female breed members too and I love that Devony is a Daywalker like Caris and Aric. Devony never had any formal training so it was a little hard to believe she'd managed to infiltrate the criminal group but she did have a lot of her father's old notes and she's obviously really smart so I was able to push that to one side easily. I enjoyed seeing her work together alongside Rafe and I think she's going to be quite an asset to the Order in the future. The fight is definitely hotting up and I'm looking forward to seeing Opus Nostrum destroyed once and for all.