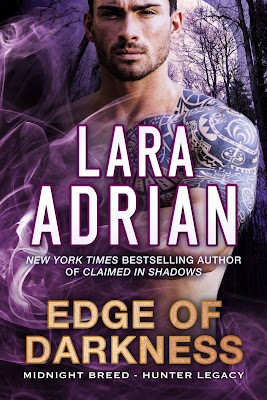 As a survivor of the horrific Hunter program, Breed vampire and former assassin Knox is a solitary man, closed off to the pain of love—and loss. A loner by choice, Knox deals in death and dark justice, expecting nothing in return. Until one snowy night he drifts into a remote town in northern Maine, where a determined beauty enlists his lethal assistance, tempting not only his hunger, but his wounded heart as well.

Lenora Calhoun has lived in tiny Parrish Falls all her life. Owner of the local diner that’s been in her family for generations, Leni’s as stalwart and stubborn as the tall pines that surround her. That unshakable resolve doesn’t sit well with everyone, least of all the most powerful family in the logging town. Leni’s been the target of their animosity for years, but with their escalating threats now putting an innocent child’s safety at risk, she takes a desperate chance on a dangerous stranger—a man who is something more than human. Knox’s deadly skills and turbulent gaze should be warning enough for Leni to guard her heart, yet she cannot deny the yearning he stirs in her blood. For the merciless Breed male is the only man she can trust in a town full of secrets, and where taking a stand could rip away everything she holds dear.

While this novel is Book 3 in the Hunter Legacy series, each story in this Midnight Breed spin-off series can be read as a complete standalone with HEA and no cliffhangers.

Review:
Edge of Darkness is the third book in Lara Adrian's Hunter Legacy series and although it's a spin off from the Midnight Breed series (and fans of that series will appreciate the cameo appearances from a few familiar faces) these books have all been designed to work as stand alone stories that can be read in any order. They each focus on a different couple and I'm really enjoying seeing some of the lethal Gen One Hunters from Dragos's awful breeding program finally find their own happily ever afters.

Knox has loved and lost once before and in his grief he walked away from his brothers and the only people he cared about. He's spent months living a solitary existence travelling across the country trying to run away from his pain. While he goes out of his way to keep to himself and avoid getting involved that doesn't stop him from standing up for people around him and when he sees Leni being bullied he immediately steps up to her defence.

Leni has spent her life living in a small town in the middle of nowhere and she's been raising her young nephew Riley ever since her sister disappeared 6 years ago. She will do whatever it takes to keep Riley safe and if that means going up against the most powerful family in town then that's what she'll have to do. She's secretly living in fear though, worrying about how she'll keep custody of the boy when his father is released from prison. When she recognises that Knox is one of the Hunters she turns to him for help but as the attraction flares between them the price may include her heart.

This was another fabulous instalment of the series, Leni and Knox had fantastic chemistry, the romance is slow build but well worth waiting for, Riley was adorable plus there's a ton of action and danger that kept me on the edge of my seat. Throw in a couple of familiar faces from the Midnight Breed series and a fight against a dangerous criminal gang defended by corrupt police officers and you have another unmissable read from Lara Adrian. I honestly can't get enough of these books and I'm already eagerly anticipating the release of the next one!