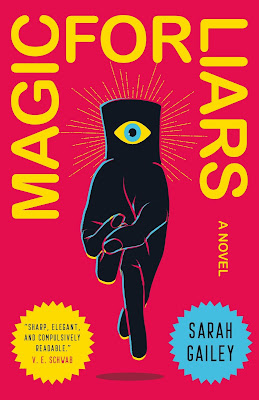 Ivy Gamble has never wanted to be magic. She is perfectly happy with her life—she has an almost-sustainable career as a private investigator, and an empty apartment, and a slight drinking problem. It's a great life and she doesn't wish she was like her estranged sister, the magically gifted professor Tabitha.

But when Ivy is hired to investigate the gruesome murder of a faculty member at Tabitha’s private academy, the stalwart detective starts to lose herself in the case, the life she could have had, and the answer to the mystery that seems just out of her reach.

Review:
I've heard such fantastic things about Sarah Gailey's American Hippo that I jumped at the chance to read their latest novel Magic for Liars. This is the story of PI Ivy Gamble who is hired to investigate a murder at an exclusive school for magic users. One slight problem is that her estranged sister twin Tabitha is one of the teachers there. Ivy and Tabitha haven't been on speaking terms for years ever since it was discovered that Tabitha had magic and she was whisked away to a special school leaving un-magical Ivy home on her own. There's a lot of jealousy and resentment built up between them with them both blaming each other for their rift.

While it's going to be hard working a job and having to deal with her sister Ivy needs the money and she's also desperately curious about the school and magic in general so she accepts the job but it isn't going to be easy when she has to try and keep her identity, and her lack of magic, a secret.

I had such high hopes for this story so it pains me to say this but I ended up finding it a little on the boring side. For a story set in a school for magic users there is surprisingly little magic and more of the focus of the story is on Ivy and her resentment towards her sister. Ivy is a borderline alcoholic who spends most of her time feeling sorry for herself and complaining about her life which made it very difficult to enjoy spending time with her. The magic we did see was really well done and I was kept on hook by the mystery surrounding the murder but some clues were so obvious I couldn't understand why none of the teachers suspected anything until Ivy came along. I did enjoy some of the side characters and I still really want to try reading American Hippo but if this turns into a series I think it's very unlikely that I'd be interested in reading any more of Ivy's adventures.

Source: Received from Tor Books in exchange for an honest review