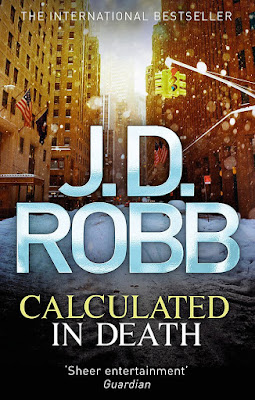 Lieutenant Eve Dallas stuck her frozen hands in the warm pockets of her coat and looked down at death.

On a bitterly cold night on the steps outside an empty office in New York's financial district, a woman lies dead. It seems like a mugging gone wrong, but Eve Dallas soon discovers that the body was dumped there deliberately.

Now she has to find out why.

Eve has a host of suspects for Marta Dickenson's murder. Using her husband Roarke's business know-how and with Detective Delia Peabody by her side - when not distracted by the upcoming premiere they're all to attend - Eve starts examining the motives of some very powerful people in order to catch a killer.

Review:
When accountant Marta Dickenson is murdered it initially looks like a mugging gone wrong, but something just doesn't quite add up for Eve and Peabody so they decide to take a closer look. They quickly discover that Marta was specifically targeted but what reason would anyone have to kill a normal woman who just did her job to the best of her ability before going home to spend time with her family? The deeper Eve digs the more she starts to see there has been a cover up and it looks like someone powerful will stop at nothing to avoid getting caught.

I don't know how J.D. Robb consistently manages to come up with such different cases for Eve to investigate. The mystery in each book is different to the last and she always manages to find new ways to surprise me. I really enjoyed watching Eve and the others work this case, we know from about the halfway point who is ordering the murders but it takes longer to pin down who is actually carrying them out. We get to see Eve test out the strength of her special Roarke designed coat, Peabody gets to do a little play acting and we also see the whole team invited to the premier of the movie about the Icove case.

There's a lot going on in this book but we still have all the banter and fun moments I've come to expect plus plenty of time with my favourite book boyfriend Roarke. I just love spending time with him and Eve, they never ever disappoint. 36 books in (although that's probably closer to 45 stories by the time you add in all the additional novellas I've read up to this point!) and I'm still totally addicted to this series and I seem to be reading them faster and faster the closer I get to the end.