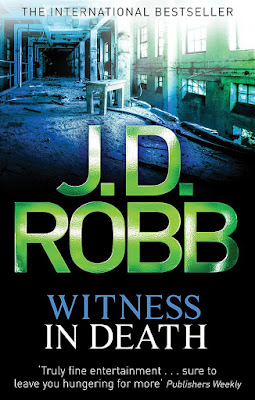 There was always an audience for murder...

Opening night in a packed theatre - a killer is on the stage. It's the perfect setting for the perfect crime. But they hadn't counted on homicide detective Eve Dallas being in the audience.

As a media frenzy envelops the high-profile actors, Eve begins to realise that behind their golden facades lurk dark, distressing pasts. The truth begins to blur with the dramatic, so that Eve's unwavering drive for justice is needed now more than ever.

Astonishing acts of betrayal, vanity, sexual deceit and unrequited love push everyone to the edge, until even Eve begins to lose her grip. But if she doesn't reach the gritty truth beneath it all, more lives will end...

Review:
Poor Eve can't even enjoy a night at the theatre with Roarke without witnessing a murder, one committed right on stage in full view of the entire audience! Now she's got to try and figure out which of the famous actors in the play killed one of their fellow cast members. She quickly realises that everyone had reasons to want the play's star dead but which one of them actually did the deed?

I think this is the first time in this series that I've almost wanted the murderer to get away with it! The victim here is absolutely vile and definitely got what was coming to him, something even Eve would agree with. If it wasn't for the death of an innocent witness I think I'd have been hoping for her to bungle the case but Eve is a stickler for the law and she will keep digging until she's figured things out no matter how horrible the victim was.

It gets to a point where you're ten books into a series that you start running out of things to say but I still absolutely love this world and Eve and Roarke have become one of my favourite couples. The way they work together is fantastic and I love that their relationship is continuing to evolve even though they're happily married. I also really love all the side characters like Feeny, Peabody and McNab so it's always fun spending time with all of them. The mystery kept me guessing since pretty much everyone who worked at the theatre had a reason to want the victim dead but I think I read this series more for the characters than for the murders at this point. This was another great instalment that still managed to leave me wanting more.