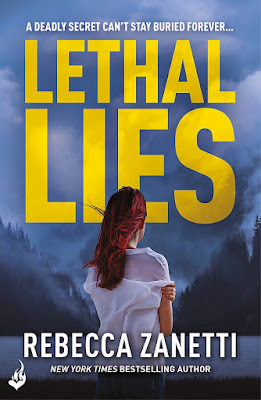 Revenge. It's the only thing that helps Anya Best sleep at night. The serial killer who murdered her sister is on the loose, and Anya will stop at nothing to put him behind bars. But she can't do it alone.

Private investigator Heath Jones's job is to bring the bad guys to justice. He knew the Copper Killer's latest victim so when her sister asks for help, he's all in.

But when Anya uses the media to taunt the killer, she exposes Heath's identity, putting them both in jeopardy. Now, long-buried secrets are coming to light - and the forces determined to destroy Heath are watching, waiting to exact their own revenge by any means necessary...

For more addictive romantic suspense look out for the rest of the titles in the Blood Brothers and Sin Brothers series. And for thrilling passion played out against a dangerous race for survival, look for the titles in The Scorpius Syndrome series: Mercury Striking, Shadow Falling, Justice Ascending.

Review:
Lethal Lies is the second book in Rebecca Zanetti's Blood Brothers series and this time we get to know Heath as he continues hunting for the serial killer mentioned in the previous book. Anya is being stalked by the killer as he keeps sends her photos of the victims, she is a profiler who has been helping the FBI try to track him but his latest victim was her sister and she is devastated. Now more determined than ever to catch the murderer she decides to taunt him by announcing her engagement to Heath in the middle of a press conference. Heath couldn't be more shocked about suddenly gaining a fiancee he's barely spoken to but the biggest problem of all is that she's just announced his name and location in the national news. It's a race against time to try and catch a killer before the enemies from his past manage to catch both Heath and his brothers.

I just completely devoured this trilogy in three days, I was totally sucked back into this world (I already read and loved the Sin Brothers books) and I couldn't seem to read these books fast enough. They're the perfect blend of action and romance and I really enjoyed getting to know Heath and Anya. I have to admit I was a little shocked by Anya's bold plan and the way she pulled Heath into it without speaking to him first but she had just walked out of her sister's funeral service and was emotionally all over the place so it was fairly easy to forgive her.

I've always loved the bond between Heath and his brothers Denver and Ryker but it's also been really interesting to catch a glimpse of the Dean brothers and their partners. Family is so important to all of them because they all had such horrendous upbringings and its really nice to see the two groups accept each other so easily. This book had less movement on the plot regarding the people from the past who are chasing the brothers but the hunt for the serial killer kept things moving and kept the tension levels high. It was interesting to see how everything is starting to tie together ready for the end of the series too, I've already read the final book and can confirm that it's a very satisfying ending.