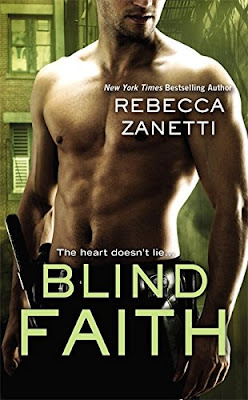 For Nate Dean, love is a four-letter word. As part of a secret black-ops military unit, he and his brothers were genetically engineered by the government to be ruthless soldiers with an expiration date. They were loyal only to one another . . . until Nate laid eyes on the woman who stole his heart and blew his world apart. Now, years later, his family is still paying the price for his mistake. But as time runs out, there's only one person who can save his family: the very woman Nate swore he'd never trust again.

The moment Audrey Madison spies Nate across a crowded ballroom, she can barely breathe. He's just as undeniably sexy as she remembers, yet there's an edge to him now that's as irresistible as it is dangerous. When he asks for her help, Audrey can't refuse. But she has secrets of her own--secrets that, if Nate ever discovers them, may cost them both their lives . . .

Review:
Nate is the second oldest of the Dean brothers and he's always taken on the role of protector of the youngest two alongside his Matt. In fact in some ways Nate was the one who worked hardest to give them as much of a childhood as they could have growing up on an army base where they were being trained as super-soldiers. Matt did the hard jobs to keep them safe but Nate was the centre of their family all the same. We've seen in the previous books what a horrific childhood they suffered thanks to the Commander and we also know they all have bombs literally ticking away inside their skulls waiting to destroy them if they can't be disarmed in time. In the last book we found out that the girl who broke Nate's heart may be the one person who has the answers they need so Nate goes in search of Audrey and answers.

Audrey's mother is doctor and scientist who plays a key role in the Commander's off the books programs including the creation and training of the Dean brothers. She threw Audrey and Nate together deliberately because she wanted to see how the boys would react to falling in love and she betrayed both of them deeply with her actions. Audrey never really had anyone who loved her before Nate and she was heartbroken when the Commander forced them apart but she was proud of the brothers for escaping and has always imagined them living a happy life somewhere without her. She only stayed behind because she was determined to put a stop to the Commander's experiments once and for all. When Audrey sees Nate all of her old feelings immediately come rushing back but there are so many secrets and misunderstandings between them that it is hard for either of them to trust each other fully.

I've loved every book in this series but I have to admit I think Blind Faith was my favourite so far, this series really does have everything I want from romantic suspense - fantastic action packed storylines, lots of twists and betrayals, a great cast of characters (I'm a sucker for a group of brothers who care about each other as much as the Deans do!) and hot but sweet romances. Nate and Audrey have brilliant chemistry but they were friends first and that shines through in every interaction between them along with a deep sense of caring and protectiveness. Throw in the chance to catch up with the other brothers and a few more hints about what could have become of the youngest Jory and I was on cloud nine reading this. I absolutely can't wait to read the next book but I have to admit I'm kind of sad the series is coming to an end!