I have absolutely no excuse for not starting the Lone City series by Amy Ewing yet - I even have the first two books sitting on my shelves giving me the side eye as I type this - but I stumbled across the book trailer and thought I'd give the series some love by sharing it here. I really need to bump this up the to read pile! 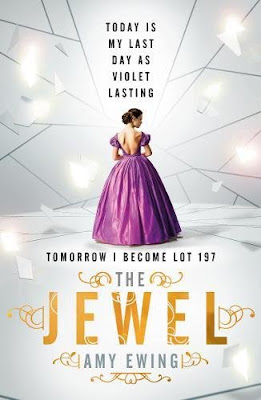 A shocking and compelling new YA series from debut author, Amy Ewing; The Handmaid's Tale meets The Other Boleyn Girl in a world where beauty and brutality collide.

Violet Lasting is no longer a human being. Tomorrow she becomes Lot 197, auctioned to the highest royal bidder in the Jewel of the Lone City. Tomorrow she becomes the Surrogate of the House of the Lake, her sole purpose to produce a healthy heir for the Duchess. Imprisoned in the opulent cage of the palace, Violet learns the brutal ways of the Jewel, where the royal women compete to secure their bloodline and the surrogates are treated as disposable commodities. Destined to carry the child of a woman she despises, Violet enters a living death of captivity – until she sets eyes on Ash Lockwood, the royal Companion. Compelled towards each other by a reckless, clandestine passion, Violet and Ash dance like puppets in a deadly game of court politics, until they become each other’s jeopardy – and salvation.

Has anyone read this series yet? If so leave me a comment telling me why I need to read it!
at 18:00