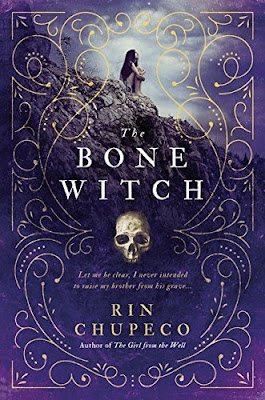 The beast raged; it punctured the air with its spite. But the girl was fiercer.

Tea is different from the other witches in her family. Her gift for necromancy makes her a bone witch, who are feared and ostracized in the kingdom. For theirs is a powerful, elemental magic that can reach beyond the boundaries of the living—and of the human.

Great power comes at a price, forcing Tea to leave her homeland to train under the guidance of an older, wiser bone witch. There, Tea puts all of her energy into becoming an asha, learning to control her elemental magic and those beasts who will submit by no other force. And Tea must be strong—stronger than she even believes possible. Because war is brewing in the eight kingdoms, war that will threaten the sovereignty of her homeland…and threaten the very survival of those she loves.

Review:
Tea had no idea she was a Bone Witch until the day she accidentally raised her brother from his coffin in the middle of his funeral! She didn't quite bring Fox back to life in the traditional sense of the word but his spirit is back and his body is now much more indestructible than it was before. Although people often seek out Bone Witches when they are in need of help they are also treated with suspicion in most villages so Tea is lucky to be accepted as an apprentice to another Bone Witch called Mykaela. Tea and Fox travel with Mykaela to the city where Tea will begin training in magic skills to become an Asha.

The story is skilfully told in two parts, there is young Tea who is a little naive and desperately trying to find her place in the world, she is eager to learn and willing to do whatever it takes to achieve her goals, then there is an older Tea, one who has obviously seen more of the world and who has become jaded because of it. She is a harder character and one who is set on revenge for the wrongs she has suffered and she is telling her story to a travelling Bard. The two stories unravel alongside each other and it was really interesting waiting to see how the younger version of Tea would eventually become the older one.

I've seen a lot of mixed reviews for this book but I enjoyed every minute of it. The main complaint amongst my friends has been that the story was a little slow to unfold and they struggled with some of the language but I personally though the writing was absolutely beautiful. Yes this is a fairly slow story but the world building is so rich and detailed that I just loved spending time exploring it. I can definitely see why the story is compared to Memoirs of a Geisha because Tea's apprenticeship was very similar to Geisha training. This is a fantasy world but it's definitely based on Japanese culture and I think Rin Chupeco did a brilliant job bringing those two elements together.

The Bone Witch is a very promising start to a new series and I'm definitely looking forward to reading the sequel to find out what happens next.