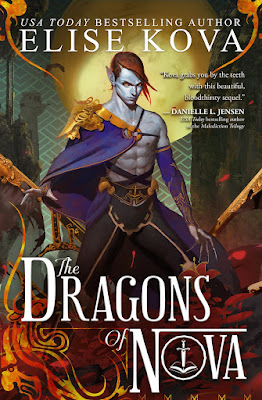 Cvareh returns home to his sky world of Nova with the genius crafter Arianna as his temperamental guest. The mercurial inventor possesses all the Xin family needs to turn the tides of a centuries-old power struggle, but the secrets she harbors must be earned with trust -- hard to come by for Ari, especially when it comes to Dragons. On Nova, Ari finds herself closer to exacting vengeance against the traitor who killed everything -- and everyone – she once loved. But before Ari can complete her campaign of revenge, the Crimson Court exposes her shadowed past and reveals something even more dangerous sparking between her and Cvareh.

While Nova is embroiled in blood sport and political games, the rebels on Loom prepare for an all-out assault on their Dragon oppressors. Florence unexpectedly finds herself at the forefront of change, as her unique blend of skills -- and quick-shooting accuracy -- makes her a force to be reckoned with. For the future of her world, she vows vengeance against the Dragons.

Before the rebellion can rise, though, the Guilds must fall.

Review:
Where the first book focused on Loom and the lives of the fenthri as they are controlled by the dragons this sequel gives readers a chance to travel to Nova to see how the other half live. We still get to watch what's happening with the guilds on Loom through Florence's eyes but Ari has travelled with Cvareh to meet with his sister Petra and see if they can come to some kind of alliance against the current dragon king. Ari holds the key to Petra and House Xin, currently the weakest of the dragon houses, to change their fortunes and come out on top for once, but Ari made the mistake of trusting a dragon once before and it nearly cost her everything so she's not going to be swayed to Petra's cause easily.

In The Dragons of Nova Elise Kova has taken everything I loved about the first book and ramped it up a gear, we still have the wonderful world building (which has just become even more fascinating now that we're seeing how the dragons live), the rich, multilayered characters and a plot full of political machinations, back stabbing and betrayals. Ari is completely out of her element on Nova and surrounded by her enemies but she's not going to let that stop her plans, she will do anything to stop the dragon king but she's only going to work with House Xin if they can prove to her that they'll make life better for the fenthri in the long term. Cvareh finds himself strangely torn between following his sister's orders and wanting to bend the rules for Ari's sake. His life is made more difficult by the fact that they must keep Ari's identity a secret because if any of the dragons from House Rok find out Petra is working with a chimera then all hell will break lose.

There are so many things I want to talk about in this series, I love the diversity, the positive female role models and also the way it raises questions about personal identity and racism. Ari is an openly bisexual character and that's treated as perfectly normal in this world which is wonderful. There are so many positive messages throughout this novel but they're all just woven in so naturally that it never bogs down the story and makes this feel like an issues book. I love it when an author can create a rich and detailed fantasy world that is so much better than our own in so many ways. The story is fast paced and full of action, things on Loom are reaching crisis point and Florence is right in the middle of planning a rebellion, Ari and Cvareh are busy on Nova trying to bring out the same goal but in a totally different way. There are plots within plots and a lot of people are playing one side against the other so it's hard to tell where most of their loyalties lie. Just when you think one thing is about to happen the author twists things around and turns the world upside down so she always keeps you guessing.

This series is absolutely fantastic and I can't wait to get my hands on the final book, The Rebels of Gold, in December!