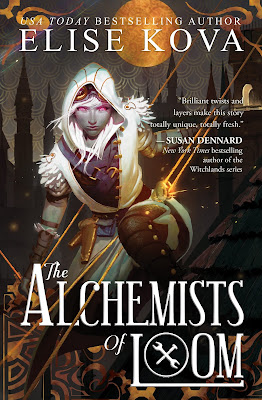 Her vengeance. His vision.

Ari lost everything she once loved when the Five Guilds’ resistance fell to the Dragon King. Now, she uses her unparalleled gift for clockwork machinery in tandem with notoriously unscrupulous morals to contribute to a thriving underground organ market. There isn’t a place on Loom that is secure from the engineer turned thief, and her magical talents are sold to the highest bidder as long as the job defies their Dragon oppressors.

Cvareh would do anything to see his sister usurp the Dragon King and sit on the throne. His family’s house has endured the shame of being the lowest rung in the Dragons’ society for far too long. The Alchemist Guild, down on Loom, may just hold the key to putting his kin in power, if Cvareh can get to them before the Dragon King’s assassins.

He offers her the one thing Ari can’t refuse: A wish of her greatest desire, if she brings him to the Alchemists of Loom.

Review:
The worlds of Loom and Nova may be within touching distance but they couldn't be more different. The fenthri, who make their home on Loom, are a society of workers who are always striving to learn and create new technology. Their people are split into five different guilds, each with a different speciality, but the guilds always used to work together and people were free to choose their own paths, that is until the dragons from Nova came down from the skies and took control. Now the guild structure has become more rigid, you are born into you guild and if you fail to pass the tests to qualify then you will die, no second chances and no other options. The dragons are much stronger and more powerful than the fenthri but they rely on their magic to get things done so they've never really focused their energy on creating or building. If it wasn't for the fenthri the dragons wouldn't even have the ability to reach Loom but once they arrived they were quick to use their superior strength to take over, the guilds are strictly regulated and they must follow orders sent by the king of the dragons or they will be destroyed.

Ari is old enough to remember a time before the dragon king's rule, she lost everything when the Guild's resistance failed and now she's made it her life's mission to do whatever she can to disrupt the dragons. Ari is a totally kickass character, she's more powerful than most fenthri (for reasons I won't go into here) and she's a skilled fighter as well as a master at creating weapons and explosives. Known only as the White Wraith Ari will take any job as long as it disrupts dragon plans and she thrives on causing them as many problems as possible. It is when she's on one of these jobs that her path crosses with Cvareh and her immediate instincts when confronted with a dragon is to kill him and harvest his organs. Cvareh is on an important mission of his own though and he offers her a boon (a powerful magical promise) if she will help him reach the alchemists guild. The last thing Ari wants is to work with a dragon, she knows from experience they can't be trusted, but the boon could be her one big chance to cause major damage to the dragon king so she reluctantly agrees.

The Alchemists of Loom does kind of throw readers into the deep end, Elise Kova has created a complex world that it takes time to get to grips with but it's well worth the effort and I loved the way the story dives straight into the action. It's clear from the very beginning that Ari is a fierce warrior bent on revenge against the dragons who subjugate her people, she's quite a prickly character who is wary of strangers and has very little interest in making friends because she is so focused on destroying the dragons. At the same time she is also intensely protective of her young assistant and protege Florence and that makes it easier to like her. Flor is the only one who brings out Ari's softer side and I loved the sisterly relationship between the two of them. It's obvious that Flor hero worships Ari and wants to be just like her but because she's not suffered the same things as Ari she is more open and far less jaded. She's fiercely intelligent and almost as skilled as Ari at creating weapons but she's also the one who brings a bit of lightness to the series and I just loved her character.

Cvareh is the youngest son of House Xin, the least powerful of the dragon families on Nova. His older sister has a lot of ambition though and she has sent Cvareh on a mission to Loom to secure an alliance with the alchemists guild against the dragon king. He is fiercely loyal to his sister and his family but he looks down on the fenthri and definitely doesn't consider Ari and Flor his equals. It took a while for me to warm up to Cvareh as he could be a little cold and distant but both he and Ari learn and grow a lot on their journey so it becomes much easier to root for them both as individuals and as a potential couple. There is a lot going on with this story, not only the gradual introduction of the incredible world that the author has created but also learning more about Ari's background and the secret mission Cvareh is on. There are some quite dark parts to the world (as you might have guessed when Ari considered harvesting Cvareh's organs the first time they met!) but there are more lighthearted moments too and there are some brilliant friendships and strong bonds too.

This was my first book by Elise Kova but it definitely won't be the last, I can't wait to pick up the sequel The Dragons of Nova and explore the dragon's home and I'm definitely going to be checking out her Air Awakens series too!