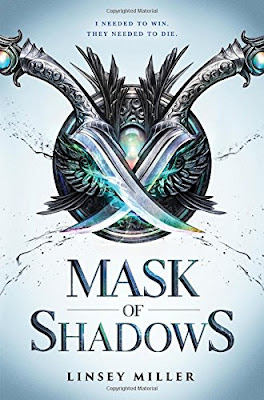 Sallot Leon is a thief, and a good one at that. But gender fluid Sal wants nothing more than to escape the drudgery of life as a highway robber and get closer to the upper-class--and the nobles who destroyed their home.

When Sal steals a flyer for an audition to become a member of The Left Hand--the Queen's personal assassins, named after the rings she wears--Sal jumps at the chance to infiltrate the court and get revenge.

But the audition is a fight to the death filled with clever circus acrobats, lethal apothecaries, and vicious ex-soldiers. A childhood as a common criminal hardly prepared Sal for the trials. And as Sal succeeds in the competition, and wins the heart of Elise, an intriguing scribe at court, they start to dream of a new life and a different future, but one that Sal can have only if they survive.

Review:
I've been having a really hard time writing a review for Mask of Shadows, mainly because I so badly wanted to love it and in the end I just feel pretty ambivalent towards it. First I want to say how much I love the fact that Sal is a gender fluid main character, I love that this was just a part of who they were and wasn't used as some kind of cheap plot device. I was also really pleased that in general most of the other characters didn't make a big deal of it, the only one that really mentioned it in a negative way was the group bully who was just looking for anything negative to say and since theres always one that didn't bother me. Most of the characters initially asked Sal how they wanted to be addressed (Quote: I dress how I like to be addressed—he, she, or they. It’s simple enough.) and then happily went along with their choices.

Where the story fell down for me was in characterisation, I don't actually feel that I got to know Sal that well even though the story was from their point of view. I know they're gender fluid, I know they have a plan to get vengeance against the people who killed their family and that's about it. The world building was seriously lacking, I needed more history of the world. I needed to understand exactly what had happened to Sal's world and why they were so keen on vengeance. I still don't quite understand how the queen saved Sal's country. Was she the reigning queen when the massacres occurred or did she come along from somewhere else entirely and put a stop to it? How is the world structured? How many different countries are there? What caused things to go wrong in the first place? I'm so unclear about all of it that if it was included in the book then I completely missed it.

This first book focuses on Sal's attempt to become one of the queen's elite assassins so perhaps we'll get more answers to those questions in the next book but to be honest I'm not hooked enough to really want to continue the series. If I'm this confused now then there is no way I'll be able to jump into the second book in a years time without a reread and I just don't have enough interest for that. The auditions to become a member of the queen's left hand are basically a fight to the death as a group of candidates battle against each other to come out on top. Apart from Sal we don't get to know any of the side characters well enough to become invested in them which is a real problem in this kind of story. Books like Hunger Games work so well because even though you know going in that Katniss is almost guaranteed to survive the games you care enough about side characters to feel the fear of something happening to them. If you don't feel the intensity because you're not worried about anyone potentially dying then nothing has the impact it could have.

The same goes with the romance in this story, Elise could have been a fantastic addition to the story but I never felt the connection between her and Sal. It all felt too instant and unbelievable for me so I didn't really care if they made it as a couple or not.

This book really seems to be a polarising one, two of my friends gave it five stars but I struggled to finish it (it took me 8 days to get through and I usually read 4-5 books a week!) so don't let my review alone put you off trying it. I'd recommend checking a mix of positive and negative reviews and perhaps trying the free kindle sample because who knows you may end up being one of the people who loves it. I'm so disappointed that I wasn't one of them too.