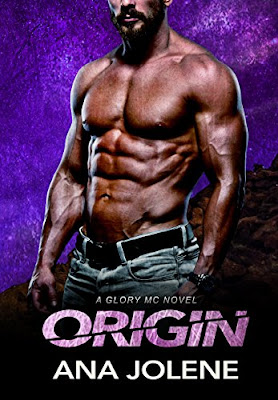 One drunken kiss ignites an inferno of burning desire. Sworn enemies, Lucky Winters and Seven Douglass struggle to forget the kiss that shouldn't have happened. Then Lucky’s past comes back to bite him and he suddenly disappears for months, leaving Seven wondering where they both stand.

When Lucky returns, he is a changed man and his prolonged absence means he must once again prove himself to the club he's sworn his life to. Except Lucky can’t seem to shake off the recent events as much as he wants to.

Seven is no stranger to this feeling. Her own mysterious past threatens to disrupt her future and when neither of them are able to stop the ghosts of their pasts from resurfacing, the only person they can turn to is each other. Suddenly, hatred morphs into love. And where there is fire and ice, there’s bound to be some steam . . .

Review:
Seven and Lucky were thrown together when their best friends started dating but their relationship has been anything but love at first sight, it started out antagonistic and then they started to enjoy winding each other up as much as possible. Until one drunken night all that had ever been between them was constant verbal sparring and banter but then a scorching hot kiss changed everything. They're suddenly both looking at each other in a new light but before they can explore that any further Lucky is called away on a family emergency and disappears without a word. When he returns weeks later Lucky is eager to jump back in where they left off but Seven has already been hurt once and she's not so willing to give him a second chance.

These two have one of my favourite kind of relationships, one where the sparks are obviously flying but they're both to stubborn to admit it and rather than act on their attraction they verbally spar to keep each other at a distance.  I could see the potential between them in the first book so I was thrilled when I found out they'd be the second couple featured in this series and I have to admit I found Seven much easier to get to know and care about than Indie was. Seven has been through her own tough times but she's a strong character who is determined to stand on her own two feet and who has never let herself rely on anyone else. She's independent and knows what she wants so suddenly realising her feelings for Lucky have changed throws her for a loop.

Lucky walked away from his brothers at Glory MC because his sister needed him and although he hated to be gone so long he did what he had to at the time. I have to admit I thought Glory MC forgave him a little too quickly when he came back, I'd have expected the gang to be more put out that he hadn't kept in contact, especially considering everything else that was going on at the time, but I was glad that Seven didn't hold back on chewing him out for what happened. I enjoyed getting to know Lucky's sister (although I'm a bit creeped out by the age gap between her and her MUCH older boyfriend who had previously been like a father to her!) but I had trouble figuring out the exact age difference between her and Lucky which meant I struggled to understand how Lucky had been able to walk away and leave a vulnerable child with their drug addict mother years ago to join Glory MC in the first place. It just didn't seem to fit that he cared about her so much but pretty much abandoned her before so I'd have liked that side of things explained a little better.

We got a bit more information about the futuristic world that this series is set in which was definitely needed and I'm curious to see where the Glory MC alliance with another group is going to go in the future, especially now they seem to have mutual and very dangerous enemies. I'm enjoying this series and looking forward to the next book, Nirvana, but I think I need to feel a little more like this is a gang of scary, badass bikers. At times the members of Glory seem to be a little too soft and the President made a few decisions that just didn't quite mesh up with what I'd expect from this kind of MC gang.