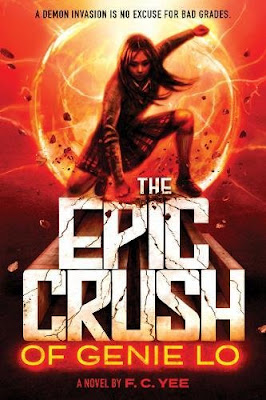 The struggle to get into a top-tier college consumes fifteen 15-year-old Genie's every waking thought. But when she discovers she s an immortal who s powerful enough to bash through the gates of Heaven with her fists, her perfectionist existence is shattered.

This epic YA debut draws from Chinese mythology, features a larger-than-life heroine, and perfectly balances the realities of Genie s grounded, Oakland life with the absurd supernatural world she finds herself commanding.

Review:
Genie Lo's biggest problem has always been living up to her mother's very high expectations, making sure she's at the top of her very competitive class and her goal to earn herself a spot in a top college but that all changes when new student Quentin transfers into her school. At first Quentin's claims that he is the Monkey King, and that Genie is the human reincarnation of his most powerful weapon, are easy to laugh off but as she finds herself facing off against creatures straight out of her childhood storybooks Genie starts to realise that there is more than a little truth to them. The question is can they stop the demon horde before it takes over the city?

I had so much fun reading this novel, The Epic Crush of Genie Lo is a fantastic, fast paced debut and I couldn't turn the pages fast enough. We've seen so many books full of Greek and Roman mythology but hardly any about Chinese folklore so it's something I know very little about and I thoroughly enjoyed learning about the monkey king and some of the other Chinese gods and demons.

Genie is a brilliant character too, she's a hard worker who has her entire future mapped out in her head, all she has to do is get top grades and get a place in a great college, hopefully with a scholarship to help pay the way, and she can escape from her hometown, get out from under her mother's thumb and live her life the way she wants to. She will do whatever it takes to achieve her goals and she's not afraid of putting in the many, many hours of studying needed to be a success story. Quentin throws her completely for a loop, she has no idea how to deal with demons and she'd really much rather be left to her studies but when she starts to realise the danger her friends, family and even strangers, are in then she steps up to make things better.

If I had one complaint I thought Genie learned to use her powers a little too easily, there was a bit of a learning curve but I think I'd have liked to see more of her training sessions and for her to have found it harder to get to grips with all of Quentin's revelations, however I was having so much fun watching the pair of them fighting all different kinds of demons that it didn't bother me for long. Genie is like an Asian version of Buffy who is fighting Chinese monsters rather than vampires, the story zooms along at a fantastic pace and I was gripped from the very beginning. I really hope that this is going to be the start of a new series and I'm definitely going to be watching out for whatever F.C. Yee writes next!

Source: Received from Abrams Chronicle in exchange for an honest review