I'm thrilled to be taking part in the blog tour today to celebrate the release of Nirvana by Ana Jolene. 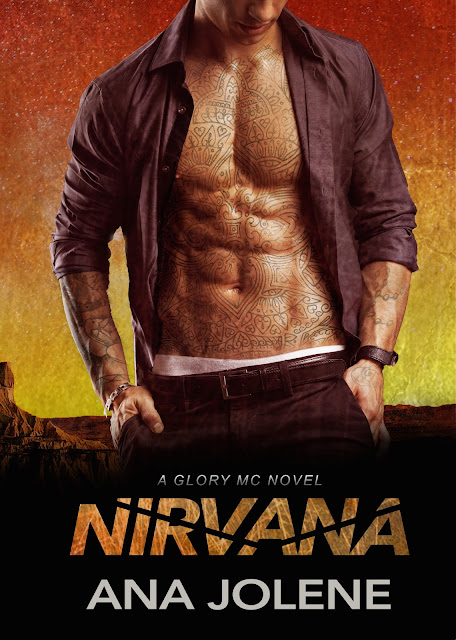 Tansy Bonheur survived the worst treatment a human being could be subjected to. After being rescued from the decaying, rat-infested cell she was caged in, Tansy hopes that this will be the end of her suffering. But a quick turn of events makes her realize that her reoccurring nightmares are the least of her problems.

Kittredge Calliope fell in love with Tansy the first moment he set his eyes on her. Unfortunately for him, Tansy recoils every time he tries to speak to her. When an attack on one of Glory MC’s members forces the club to evacuate the clubhouse, Kitt must get Tansy to safety. But not even being in the embrace of Glory MC’s sergeant at arms can protect Tansy from the people out to get her.

In this dangerous, ruthless world, will their newfound love be enough to bring a hardened warrior to his knees and turn a timid beauty into the fighter she needs to be?

Black smoke billowed into the red sky. It was hard to believe that not more than an hour ago, the entire club had been here partying it up until the first ray of morning light. I had gained only a half an hour’s worth of sleep before the call came in. Had made Lucky say it twice because I couldn’t believe it the first time.

Someone had tried to kill our prez, Knuckle.

The secretary and treasurer of Glory MC was known for his cool composure but that was nowhere to be seen now. “Shit, Kitt. I need you to get down here right now! It’s bad.” Panic laced every one of Lucky’s words. I could hear sounds in the background, of something crackling and a woman sobbing. What the hell had happened? “And bring the fucking truck!” he shouted. I couldn’t even get a word in before the line went dead.

The sweet butt in my bed groaned as she turned to take me in. I was standing naked in the middle of my bedroom and she called me back to bed but I was already too busy sending out a mass text to the group to enjoy her company now. “You need to leave,” I told her urgently as I hit send on the text. Within seconds, the club would be on their way to the site of the attack. “Fucking shit.” I still couldn’t believe it! How the hell did this happen?

Tossing on my clothes didn’t take more than a minute, but tossing the woman out of bed? That took more patience than I had right now. “What’s going on?” she asked.

“No time to explain. Get up.” I tossed my cut over my shoulders, feeling the weight of my fear starting to creep into me. Lucky had said to bring the truck. The last time it had been used, Newt, our previous vice-prez, had been injured in a similar bombing. Would tonight end in a similar fashion? With another dead brother to bury?

“But I can’t find my pants,” the woman whined.

Fuck, I didn’t have time for this shit. Knuckle was dying. Or maybe he was dead already. I wouldn’t know until I got there. Without another word, I left, ignoring the sweet butt’s calls after me. I also had to make sure Angel was on his way with the truck.

The throaty purr of the engine was all I could hear now as I increased speed, desperate to get towards the dark clouds that were a depiction of the Phantoms’ betrayal.

There was no one else who would have done this. No one else who had the means and the motive.
I cut the engine as soon as I saw them, knowing by their expressions that it was bad. Whatever explosive device the Phantoms had used, it had completely disintegrated Knuckle’s bike. It wouldn’t surprise me if our prez was in the bits and pieces of the air we were breathing in right now.

“Angel’s on his way,” I told their fear-glazed faces as I approached. “How is he?” I could see for myself that Knuckle’s legs were a mess of blood, flesh and dirt but at least they were still attached to the rest of him, not blown off like I’d expected. The front half of his body was covered in blood, but that didn’t seem to deter Hanna who was practically lying on top of him, tears spilling from her eyes.

“He’s breathing but Hanna says he’s unstable,” Seven answered. Hanna was doing something to him that my uneducated mind couldn’t understand. Whatever it was, I hoped it would work until Angel arrived with the emergency vehicle.

Just then, a text from Angel came in: ETA 1 min.

As I relayed the message, I hoped to hell Knuckle could last that long. “Hold on, baby,” Hanna was saying to her man, choking back tears. “Just hold on.”

As selfishly as Knuckle had made the rash decision to give up Vincent Cavezza to the Phantoms without the consent of the club, he didn’t deserve this. Hell, no one ever deserved to be blown up without a fighting chance.

Headlights from the emergency vehicle blinded us before Angel, Hastie, and Beck hopped out.
Hastie immediately rushed to us and dropped to his knees, giving his father a quick once-over. Despite the fact that he hadn’t said anything, I could tell that a million things were running through his mind. Did he too believe that this could have been avoided if Knuckle hadn’t made a trade with the Phantoms?

Losing Bronson would have been tough, but if we had known that handing over Vincent to them would result in this attack against us, we wouldn’t have agreed to the trade. There was nothing to be done about that now though. The deal had been made. The results were spectacularly shit though.
“Make room,” Beck called out as he and Angel brought over a gurney.

Hanna jolted into action, her nursing skills coming to her easily as the shock wore off. As the three of them made quick work of transporting Knuckle gently into the van, Hanna turned to me. “This is more than I can handle,” she said in a panicked voice. “I need a doctor.”

Yes. This was more than just a bullet wound or a severe case of road rash. As a nurse, Hanna wouldn’t have the right training.

Flipping my phone out, I dialed the number I knew by memory. I wanted Knuckle in capable hands especially if his case was as severe as it looked.

When I snapped my phone shut, my eyes scanned the surroundings for the club’s sec and trez. I had yet to see Lucky and second to Knuckle, he was the other person I wanted to make sure was all right. “Where’s Lucky?”

“He’s fighting the fire,” Seven said, fear a noticeable nuance in her voice. Scanning the destruction the explosion had made, I saw a figure working double time to tame the flames.

“Get him to Neptune’s as quickly as you can. Doctor Reyes will be there to meet you,” I said before jumping to help Lucky corral the fire not more than a few feet away.

When the blond saw me approach, his cornflower blue eyes met mine, but no words were spoken as we joined our efforts together to put out the fire. By the time we had it cleared, the rest of the club had arrived.

In the eyes of everyone, there was a mixture of fear and worry as Knuckle was rushed away to the clubhouse. Others moved to follow, but Seven approached me, looking confused and worried. “Hey. Have you seen Lucky?”

I turned to where I thought the sec and trez was but he was no longer by the truck. “He was right there a second ago.”

“We’re about to leave,” Seven explained.

Searching, we turned together, finding him standing right where Knuckle’s bike had been. “Lucky!” I called out. What the hell was he doing? Together, Seven and I ran over to him, slowing as we took in his tight-lipped expression. “Hey, man. Knuckle has already been taken to Neptune’s. Come on. We gotta go.”

Lucky’s eyes hinted at the internal pain he was experiencing so it was no surprise when his voice came out shaky. “I saw someone by his bike earlier, but didn’t think much of it at the time. I should’ve realized that someone was tampering with it.” His boot kicked at the sand beneath us, causing it to plume up like a little cloud.

Aw, hell. The guy believed that this was his fault. Seven recognized the guilt in his words, too. “There’s nothing you could have done to prevent this,” she said.

“She’s right,” I agreed. “We couldn’t have predicted that the fuckers would turn on us so quickly.” The trade hadn’t lasted very long before they’d gone and shit on us. “Come on, we need to be there in case Knuckle needs us.”

It was clear that Lucky felt torn between wanting to be there for Knuckle and going after the Phantoms himself. I met his pained expression. “I know what you’re thinking . . . ”

“Shut it. Get those thoughts out of your head.” It hadn’t been his fault and I wasn’t going to allow him to believe that he could have prevented this from happening. “You did nothing wrong, you follow?” Guilt was a nasty thing to deal with and Lucky had been burdened with too many responsibilities already to be held accountable for things out of his control. When I didn’t get an immediate answer, I repeated myself. “I said, do you follow?”

“Good. We’re going to find these bastards,” I promised as I patted his cheek. If Knuckle died, the Phantoms would pay for every drop of his blood that was spilt.


About the Author
Ana Jolene is the author of the Glory MC series and the Contemporary Romance series, Moonrise Beach.

Growing up as a rebellious kid didn’t allow for much reading time. It wasn’t until she was in university that she found her passion for books and has since then devoured every book placed before her. Ana holds a B.A. in Psychology and has worked in both IT and Administration. But she’s had the most fun in the bookish world, working as a reviewer, columnist and assistant to multiple sites and authors.
Ana currently lives in Toronto with her family and an extremely lazy Shih Tzu whom she adores. To learn more about Ana and her books, subscribe to the newsletter to be notified of the hottest new releases and giveaways!