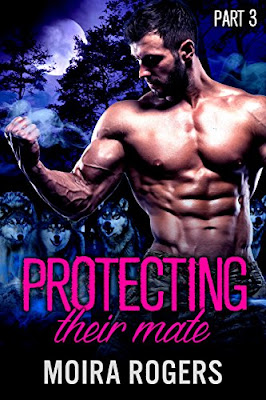 As the full moon raises tensions--and appetites--Ashley indulges her wildest fantasies...and discovers what it truly means to belong to the pack. But Blake's control is tested as outsiders descend on the pack's territory, and Ashley discovers that following her heart may be the only way to find her mate.

Ashley's heart longs for one man, but her wolf demands that she test herself against the alpha. Can she settle for a life of never knowing, or will she risk everything for Blake?

Review:
This is part three of a serialised novel so I really wouldn't recommend reading it if you haven't read the first two parts, it's also worth noting that this serial was previously published under the pen name Mia Thorne and although it has a nice new cover the content hasn't changed so there's no need to buy it again if you've read the previous incarnation. Now we've got that out of the way I'm going to say if you like your paranormal romance hot and steamy then this is definitely the series for you, you may actually be familiar with these authors under their other pen name Kit Rocha and if you are a fan of the Beyond books then you're going to love this one too!

Since her rescue Ashley has really started to embrace her werewolf side thanks to Blake and the rest of his pack. They've taught her that her desires are natural and nothing to be ashamed of and now she's started to realise how wonderful life can be surrounded by other shifters. Her wolf still hasn't decided on a mate though and as much as her heart now belongs to Blake they're both worried her wolf will choose another. To add to an already stressful situation they also have to deal with the arrival of a rival pack in their territory, a pack who seem very eager to claim Ashley for themselves.

I really enjoyed the final instalment of this serial, its been great to see how much Ashley has grown in confidence since the beginning and I've really enjoyed meeting all five of the men in her new pack. While I think Blake and Ashley are perfect for each other I've also enjoyed her experiences with the rest of the pack and I'm definitely looking forward to seeing them all find mates of their own. It's actually hard to decide which of the wolves I like the most, they all have unique qualities that draw me to them but I have a feeling that I'm probably going to love Mac and Connor's story the most. What can I say, I just love the way these authors write a triad relationship (Ace, Cruz and Rachel from the Beyond series are still my all time favourites!) so I have great expectations for these two when they find a woman who is willing to take them both on!

This is definitely one of the hottest series that these authors write as Moira Rogers but there is also a nice amount of romance between the main couple and some fun world building as we learn more about the werewolves and how they live. If you're not a fan of multiple partners then this series isn't for you but if you're open to a world where that isn't just accepted but also encouraged (all completely consensual, don't worry there's no dubious content) then you should give this serial a try.