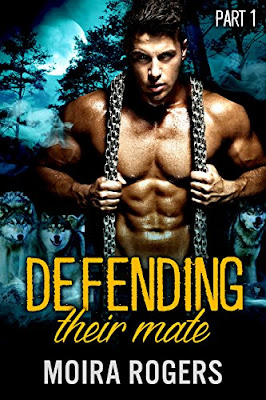 It's been three months since her new pack saved Grace from captivity. They're everything she never knew to expect as a werewolf--loyal, devoted, and fiercely protective. But her peace of mind is threatened by the arrival of her mating fever--and the crushing desire it brings.

The last time she went into heat, her wolf would accept none of her captors, and the thwarted need almost drove her mad. Now, she finds herself drawn to two very different wolves. Connor's easy, affectionate nature makes her feel worshiped, sheltered. And Mac's inner darkness calls to her own feral cravings...

Tragedy has left Mac emotionally locked away, unwilling to take a mate. It doesn't matter that Grace sparks lust as well as his instincts. He'll keep her safe, defend her--with his life, if necessary. But he can't risk his heart.

Control over his wolf is all that matters to Connor--until Grace. But claiming the beauty is anything but simple. Falling for her could shatter the bond he shares with Mac, and cost him everything that's kept him sane.

When Grace goes into heat, all bets are off. Because only one thing matters--soothing her fever.

NOTE: Previously published as Defending their Mate Part One & Part Two as Mia Thorne. Though the stories have been reissued, the content is unchanged.

Review:
Defending Their Mate was previously released as an eight part serial under the pen name Mia Thorne and is now being rereleased in 3 parts under the name Moira Rogers. As far as I'm aware there have been no changes to the original text (apart from reducing the number of instalments) so if you already read the previous version you don't need to purchase this one. This is the second book in the Last Pack series so if you've already read Protecting Their Mate you'll be familiar with the world and the characters in this story. I was actually really excited to find out that Connor and Mac's story was next because I loved them in the first book, Grace is going to be one lucky wolf to catch these two!

It's been three months since the pack saved Grace from the werewolves who were trying to sell her and she's still trying to come to terms with everything that has happened to her since. Her new pack couldn't be more different than the old one, she's no longer a prisoner and here she is treated with respect and welcomed like a member of the family. She has become friends with Ashley but she is still wary of the men, especially because she knows she's coming into heat again and she doesn't really understand what that means or what will be expected of her.

Connor has taken a particular shine to Grace and woos her with all kinds of gifts as he tries to make her feel welcome but he has the worst control of his wolf out of any of them and is terrified of hurting or scaring her. Mac is the one who is always in control of himself and Connor trusts him to keep them both in line, the two of them are incredibly close and have a bond that they don't share with the rest of the pack. Mac is also attracted to Grace but he's had his heart broken once already and he's not willing to take that risk again, especially given Grace's history. All bets are off when she comes into heat though, she desperately needs what only they can offer but all three of them are wary of taking the next step. Especially Connor and Mac who worry they'll lose each other if she picks one of them as her mate.