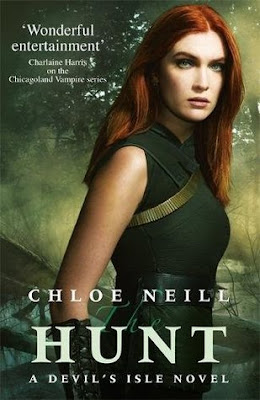 The hunter becomes the hunted in this thrilling novel set in a New Orleans devastated by a Paranormal war . . .

When bounty hunter Liam Quinn discovered that Claire Connolly was a Sensitive and infected with magic, he should have turned her in to be locked up in the prison district known as Devil's Isle. Instead, he helped her learn to control her power and introduced her to an underground group of Paranormals and humans who know the truth about the war and those who fought it.

Now the weight of Liam's own secrets has forced him into hiding. When a government agent is killed and Claire discovers that Liam is the prime suspect, she races to find him before the government can. But she'll discover proving his innocence is no simple matter. Their enemies are drawing closer, and time is running out . . .

Review:
After being outed as a Sensitive during the last big battle Claire is having to keep a very low profile to avoid Containment catching her and imprisoning her in Devil's Isle. She's no longer able to run her store so she's focusing her energies on scavenging for useful supplies for people who aren't as lucky as she is. Liam's life was changed forever when he was hit with a blast of magic during the battle, Claire knows it gave him new abilities but he's kept his distance from her ever since it happened so she doesn't know what form his powers have taken. She understands his need to come to terms with what happened but it hurts her that he was able to walk away from her so easily and it's been several months since she even heard from him.

When Claire finds out that Liam has been accused of murder she knows she has to warn him. He wasn't even in the city so it's obviously a set up but what does anyone have to gain in blaming him and why has he suddenly become a target? With all Containment's energies focused on finding and arresting Liam it's up to Claire and her friends and allies to prove his innocence and figure out what's really going on.

I have to admit I was a little disappointed at the beginning of the book when I found out that Claire and Liam have been apart for the last few months. I was annoyed with Liam for pushing Claire away, especially when she was one of the few people who would be able to understand what he was going through. I didn't like how unsure she had become of herself and their relationship in his absence so it was a disappointing change of direction for them as a couple. I did enjoy seeing Claire and Gavin go searching for him though and I was really pleased that Claire showed a backbone and told Liam that she wouldn't sit around waiting forever for him. The beginning of the book felt a little on the slow side because of the relationship angst but luckily the pace really picked up when they were working alongside each other again.

There are some really interesting revelations in this book, both about Claire's background and her family and about what is happening in the world by the groups working against the paranormals. It's so frustrating that Containment will happily work with Claire and other Sensitives or Paranormals when they need their help but that they immediately start to treat them badly again the minute the current crisis is over. Unfortunately it's also incredibly easy to believe and very true to life, humanity has a horrible track record when it comes to showing prejudice against any kind of difference - either real or perceived - and Chloe Neill has done a brilliant job of showing that in her stories.

I can't say much in this review for fear of spoilers but there are some MAJOR changes at the end of the book that are going to have a huge impact on where the series goes from here onwards and I can't wait to see what the author has in store for us next. I'm really enjoying this series and have a feeling things are only going to get more intense in book 4!