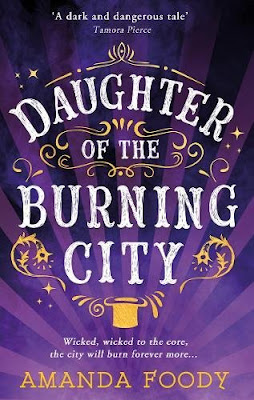 Reality is in the eye of the beholder…

Even among the many unusual members of the travelling circus that has always been her home sixteen-yea-old Sorina stands apart as the only illusion-worker born in hundreds of years.

This rare talent allows her to create illusions that others can see, feel and touch, with personalities all of their own. Her creations are her family, and together they make up the cast of the Festival's Freak Show.

But no matter how lifelike they may seem, her illusions are still just that―illusions, and not truly real.

Or so she always believed…until one of them is murdered.

Now she must unravel the horrifying truth before all her loved ones disappear.

Review:
Gomorrah is a travelling circus that is so large it's practically a city in it's own right. It's a place of magic and mystery and everything about it is designed to entice the crowds to spend their money before it passes on to a new destination. Gomorrah is also a safe haven for magic users (known as jynx-workers) and misfits who aren't always accepted in normal society.

Sorina has been with the circus for as long as she can remember after being adopted by the show proprietor, Villiam, when she was a young child. Born with no eyes but able to see with the use of her magic Sorina is a master of illusions and she is in charge of running the freak show at Gomorrah. Sorina's illusions are so real that they actually become people that are capable of living their own lives, she has used her abilities to create a family for herself from the stern but caring uncle Gill who is part man and part fish and unable to breath out of water, the motherly Nicoletta whose super strength isn't a reliable gift, to her beautiful, and incredibly bendy younger sister Venera who makes a perfect acrobat and more besides. Each of Sorina's illusions has become a real person and she loves them all deeply.

No matter how happy Sorina has always been at Gomorrah things are about to change for the worse, the unrest in the world outside the circus is causing friction between the jynx-workers and the general public an there is a darkness lurking inside the circus that Sorina is only just starting to uncover. Sorina has always believed her illusions are immortal, they are connected to her in a way that she believes keeps them safe so when one of them is killed she is shocked and horrified. Now she must try to figure out what is going on before more of her family are lost, why are her illusions being targeted and how can she keep them all safe when she doesn't know where the danger is coming from?

The story was a little bit of a slow burner for me, it took me a little while to get completely sucked into this world but once it hooked it's claws into me I was totally invested in the characters and heartbroken every time Sorina lost another member of her family. I think where the book fell down a little was the world building outside of the circus, there is obviously a lot of political intrigue and things happening outside are having a huge effect on life inside Gomorrah but there were times when I struggled to connect to what was going on.

When it came to Sorina's life in the circus I thought the descriptions were wonderful, I was easily able to picture the setting and I loved the different types of magic that were mentioned. I also really fell in love with Sorina's whole family, I loved how they all had their own personality traits and how they could irritate each other like any family but that they were always there for each other no matter what. I also really enjoyed the introduction of Luca's character, he had his own jynx-worker abilities and was a bit of a mystery man so I was intrigued from the start. I liked the hint of a developing romance but was glad that it didn't overtake the rest of the story and the focus remained on Sorina trying to figure out why her family was being targeted.

Daughter of the Burning City is a great debut from Amanda Foody and I really hope we're going to get more stories set in this world, I'd love to revisit Gomorrah and spend more time getting to know the different jynx-workers we came across here. Either way I'll definitely be keeping an eye out for whatever this author publishes next. I have very high hopes for her next story!

Source: Received from Harlequin in exchange for an honest review & I also purchased a copy in my Fairyloot box.