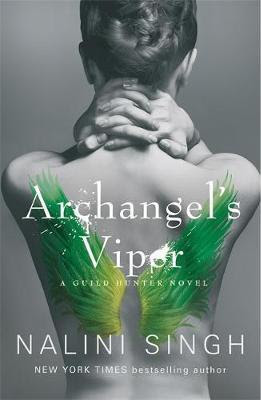 Enter New York Times bestselling author Nalini Singh's breathtakingly passionate Guild Hunter world with the story of a woman who isn't a vampire or an angel . . . or human . . .

Once a broken girl known as Sorrow, Holly Chang now prowls the shadowy grey underground of the city for the angels. But it's not her winged allies who make her a wanted woman - it's the unknown power coursing through her veins. Brutalised by an insane archangel, she was left with the bloodlust of a vampire, the ability to mesmerise her prey, and a poisonous bite.

Venom is one of the Seven, Archangel Raphael's private guard, and he's as infuriating as he is seductive. A centuries-old vampire, his fangs dispense a poison deadlier than Holly's. But even if Venom can protect Holly from those hunting her, he might not be able to save himself - because the strange, violent power inside Holly is awakening . . .

No one is safe.

Review:
I can't tell you how much I enjoyed being back in this world, I love everything about this series and diving into a new book is always like getting the chance to catch up with old friends who you haven't seen in months. I have to admit that I was a tiny bit disappointed that we didn't get to see what has been happening with Elena since the huge discoveries she made about her family in the last book (I don't recall her being in this book at all but I could be wrong!) but that's partly because the timeline of this story overlaps slightly with Archangel's Heart so at the start of the book Elena and Raphael are both away from New York at their meeting with the Luminata. Besides, this is Venom and Holly's story and it's only right they should take centre stage!

Holly has been through so much since she was attacked by Uram in the first book, she survived something horrific but it has changed her in ways that have never been seen before so nobody is able to tell her what to expect or help guide her through the process. She has started to come to terms with what has happened though and is working hard to rebuild her life, even if it's not the life she originally intended. It was so great to see how far Holly has come since the beginning, she still lives in fear that Uram's madness might have tainted her, especially since she is hiding some disturbing symptoms, but she is determined to make the best of things and she refuses to quit.

I've always been intrigued by Venom, he's quite a mystery man but I wanted to know how he came by his snake like eyes and his poisonous fangs! He's been out of the city for a couple of years but he's called back to help keep things under control while Raphael is out of the territory and he finds that the baby vampire who refused to answer to anything but Sorrow who he left behind is now all grown up and changing into the woman he always thought she could be. When someone puts a price on her head it's obvious she needs back up and Venom can't resist being the one to watch out for her.

Theirs was a quieter more slow burn romance than some of the others in the series, there has always been a low key level of respect between them that felt like it could become friendship but as they also have a lot in common that connects them in a unique way. They are both unusual, even for vampires, and their abilities are enough to scare others but their similarities mean they understand each other in a way nobody else manages to. I really enjoyed spending time with them both and seeing Holly grow into her own strength and them grow closer as a couple.

I don't want to talk about details from the plot but there are a lot of really interesting revelations in Archangel's Viper that kind of tie back into some of the things Elena and Raphael found out in the previous book. Things are definitely getting interesting and I can't wait to see how it plays out over the next few books. Add in that we get to spend time with the Legion, and with one of my favourite angels Bluebell and I enjoyed every minute of this book. Nalini Singh has created such a fabulous world here and I love spending time in it!