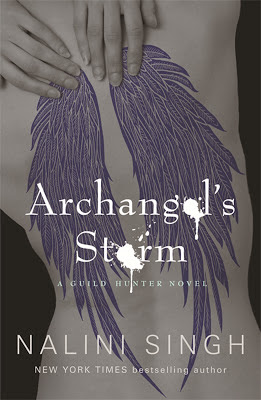 With wings of midnight and an affinity for shadows, Jason courts darkness. But now, with the Archangel Neha's consort lying murdered and her rage threatening cataclysmic devastation, Jason steps into the light, knowing he must unearth the murderer before it is too late.

Earning Neha's trust comes at a price - Jason must tie himself to her bloodline through the Princess Mahiya, a woman with secrets so dangerous, she trusts no one. Least of all an enemy spymaster.

With only their relentless hunt for a violent, intelligent killer to unite them, Jason and Mahiya embark on a quest that leads to a centuries old nightmare . . . and to the dark storm of an unexpected passion that threatens to drench them both in blood.

Review:
When the archangel Neha's consort Eris is murdered her rage threatens to destroy the balance of power amongst the cadre of ten and if left unchecked thousands of innocent lives could be lost. Neha already has a grudge against Raphael which makes him and his territory a likely target for her rage. The one person that Raphael can send to try and gain Neha's trust and help her investigate the murder is his spymaster Jason. Jason is an expert at uncovering secrets and his unique abilities make him perfect for the job but the only way Neha will allow him into her territory is if he forms a blood bond with her niece Mahiya. The last thing Mahiya wants is to be tied to an enemy spy, especially when she has secrets of her own that are so dangerous her life would be forfeit if they are uncovered but she has no choice but to go along with Neha's wishes and she has her own reasons for wanting to uncover who is behind Eris's death. As Jason and Mahiya work together to uncover the truth they uncover a shocking betrayal that threatens to turn Mahiya's world upside down. Can she trust Jason to keep the promises he made to protect her or will he end up breaking her heart?

I'm a huge fan of the Guild Hunter series, I love Raphael and Elena but I've been dying to learn more about Raphael's Seven, the trusted angels and vampires who have had his back for centuries, ever since the first book so I'm really excited that they each seem to be getting their own book. Jason has intrigued me from the moment we met him, I knew he had to have some kind of darkness in his past and I was desperate to get to know his secrets. Although I was expecting him to have a tortured past I had no idea just how badly he had suffered, in fact reading about the things he had been through actually brought tears to my eyes which is a testament of just how invested I was in his story. My heart broke for the things he had seen as a child but I admire him for the strength of character he showed to survive with his sanity in tact.

I was a bit unsure how a romance could work between Jason and a member of another archangel's court, especially someone who is actually related to Neha, but I was pleasantly surprised by how much I found myself liking Mahiya. For a lot of reasons that I'm not going to go into in this review (you'll have to read the book to find out what they are!), Mahiya has never been a favourite of Neha's. The only reason she was allowed to survive was as a punishment to her parents and Neha has taken great pains to keep Mahiya in her place at the bottom of the court hierarchy when by birth right she should be an important member of the family. Mahiya has been through so much that it would have been easy for her to become a bitter and hateful person but she is determined not to let Neha beat her. She knows that the only way she can win is to remain true to herself and she has shown incredible strength to manage that. She makes a worthy heroine for Jason and it doesn't take long for him to see that. They really are so well matched, Mahiya understands Jason on a level that nobody else ever has and she accepts what he can and can't offer her without hesitation. I don't think anyone will be disappointed by the sexy scenes between the two of them, Jason is one hot dominant angel who knows exactly what he wants and how to get it!

Alongside the mystery of who murdered Eris, which I have to admit I guessed in advance but not until fairly near the big reveal, Archangel's Storm also allows us to catch up with favourite characters we already know and love. I always eat up any scene between Raphael and Elena but some of the highlights in this book were the ones between Dmitri and Honor. I love how sweet Dmitri is with Honor, he is like a completely different vampire when he is with her but that doesn't make him any less scary as far as anyone else is concerned. Illium always steals any scene he appears in, I just adore Bluebell and I really hope he has his own book soon because I'd love to see him find a worthy heroine. My only disappointment with this series is that I'm now up to date which means I'll have to wait a whole year in between each new instalment - I foresee a lot of re-reading in my future to get my Guild Hunter fix. At least I still have the Psy-Changeling series to catch up on so that will keep me going for the next few weeks anyway. Nalini Singh is fast becoming one of my favourite authors, I haven't read anything of hers that I didn't love and I can't recommend her highly enough to paranormal romance fans.