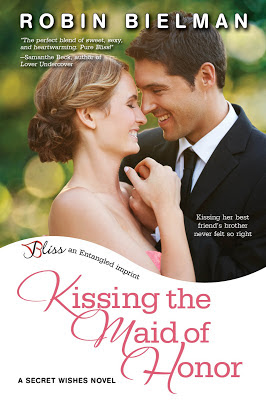 Kissing her best friend's brother has never felt so right . . .

Sela Sullivan is resolved to be the best maid of honor ever, even if it means tolerating the best man. Insufferable, too-handsome Luke Watters is not only the guy who humiliated her at a kissing booth in high school, but he also happens to be her best friend’s older brother. Positive he’s the same arrogant jock, Sela vows to focus on her duties and steer clear of the frustrating—and frustratingly tempting—Luke.

As a world-renowned extreme-sports photographer, Luke is used to undertaking life-risking adventures. But risking his heart for the beautiful Sela Sullivan, who clearly still hates him for his rejection all those years ago? He didn’t see that coming. Sela inspires a passion he’s never known, and the more time they spend together, the more he craves her. But can he prove to the maid of honor he’s become a man of honor?

Review:
As a teenager Sela had a massive crush on Luke but when he publicly humiliated her at high school she swore to stay as far away from him as possible. Luckily his job as an extreme sports photographer has keeps him away from their home town and their paths haven't crossed in years. Now his sister Vanessa is getting married though and although Sela is determined to be a wonderful maid of honor for her best friend she is dreading having to face Luke again. Luke didn't mean to hurt Sela but the intensity of their first kiss shocked him and he reacted badly. Now he is home for a few weeks and he is starting to remember how much fun they used to have and he is even more drawn to the beautiful woman she has grown into. He never planned on settling down but he finds himself wanting to prove to Sela how much he has changed and convince her to give him a second chance.

I love small town romances, you know, the ones with a selection of quirky characters that are set somewhere that everyone knows everyone else's business and that are about families who love to meddle in each other's love lives! Give me a light hearted story with plenty of humour, a lot of romance and at least a little bit of spice and I'm happy so it's no wonder that Kissing the Maid of Honor hit the spot perfectly. I already knew I loved Robin Bielman's writing style from reading Yours at Midnight so I jumped at the chance of reviewing the first book in her new series and I'm really glad I did. I don't think I've ever read a romance novel that starts with the heroine making a wish that she will never have to see the hero again but I knew from that moment that fate had plans for Sela and Luke and they didn't involve keeping them apart!

Sela is the kind of woman you'd want to be friends with, she is sweet, kind and caring which shows not just in her personal life but also in her job as a nurse. Luke is an adrenaline junkie who loves taking risks and living life on the edge but after a nasty accident he has become more wary and needs time to recover both in mind and body. He is drawn to Sela from the beginning but is wary of getting involved with his best friend's little sister which is the main reason he reacted so badly to their kiss when they were in high school. Sela was heartbroken by Luke's rejection after they kissed and her reputation was ruined for the rest of her time at high school which made it very difficult for her to move on with somebody else. I don't think Luke ever realised quite how much he had hurt her and although he did apologise for his actions I think I would have liked Sela to have made him grovel just a little bit more before she accepted the apology. That was my one slight niggle with the story though and I loved seeing them get to know each other again after spending so much time apart. They can't deny the attraction between them and they are both irresistibly drawn to each other. The banter between them was great and fun and they have off the charts chemistry, I just wish their story had been written with a hotter spice level because it was a shame to miss out on the action after such a fabulous build up!

Overall Kissing the Maid of Honor was a brilliant start to the Secret Wishes series and I can't wait to carry on reading the books. I had a feeling that Shane's book would be next and I'm excited that Robin Bielman confirmed that for me (Erin's story will be book 3). This is a series I'm definitely looking forward to continuing and I'd highly recommend it to contemporary romance fans.