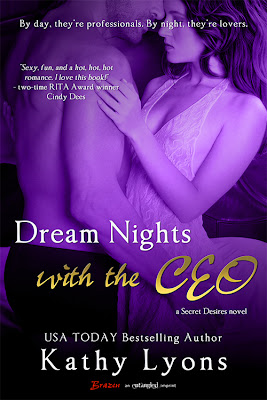 Hotel chain CEO and millionaire Wyatt Monroe is a stick in the mud. Sure, he's hot as sin, even with the tie, but free-spirited assistant Megan Bradford refuses to jeopardize their perfect working relationship. Why mess that up with sex? She knows he's the love 'em and leave 'em type, and she's determined to find a family man.

Review:
Megan has had a crush on her boss Wyatt ever since she first started working for him but she loves her job too much to ever risk starting a relationship with him. Although she dreams of marriage and a family she wants to build her career first and she is well on her way to achieving her goals, especially with the new promotion Wyatt has just offered her. Wyatt has also been attracted to Megan for years but the closer they have grown as friends and colleagues the more he knows he can't push for something more. He wouldn't want to lose his right hand woman because he'd be lost without her input into his businesses. As they travel around the country looking for the right B&B for Wyatt to invest in next their attraction really kicks in as they start having erotic dreams about each other. That makes it very hard for either of them to keep their relationship on it's usual business only footing, especially when they find out they've been sharing the same dreams.

I haven't read anything by Jade Lee before but I've heard a lot of good things about her historical romances so I jumped at the chance of reading this first story in her new contemporary romance series published under the name Kathy Lyons. I guess the synopsis kind of gives it away but this isn't quite a standard contemporary romance - it actually has a paranormal twist and I'd classify it more as a romance with a hint of a ghost story. I don't think it's heavy enough on the paranormal for me to class it as paranormal romance though so it should still appeal to CR fans.

Dream Nights with the CEO is infused with a lot of humour which makes it a quick and fun story to read but I have to admit there were a few inconsistencies that kept pulling me out of the story. This may have been partly because I was reading an advanced copy so these errors may have been corrected in the finished version but I'm going to mention them anyway because they did bug me a bit. I was confused because it is mentioned many times how wealthy Wyatt is, he is a millionaire several times over so buying into another B&B shouldn't be a huge deal for him but there were a couple of points where Megan starts to worry that if something goes wrong with their latest project she could financially ruin him. At one point he already owned six B&Bs but then later on it was made to sound like he only had two. These are fairly minor irritations but they did leave me feeling confused.

I really liked the idea of the two characters sharing erotic dreams and that giving them the push to take their relationship to the next level but I think I would have preferred it if they had taken that step a little faster than they did. It's hard to explain exactly what I mean without giving spoilers so I'm just going to say it seemed a bit crazy that their dream antics lead to the events that occurred in their real lives when neither of them remembered actually doing the deed. Yes, I know that is vague but I think people who have read the book will know what I mean and I'm happy to answer questions if anyone doesn't mind spoilers. As far as the actual characters go I quite liked both Megan and Wyatt but as this is quite a short story I never really felt I got to know them as well as I could have. Their relationship ends up going from zero to one hundred miles an hour very quickly and it does seem a bit rushed towards the end even though they make a cute couple. I am interested enough in the concept for the series that I'll read the next one to see if my issues with this one have been ironed out though and since I like the authors humour too I'm also planning on checking out some of the books she has published as Jade Lee.