Warning: Condoms were tested and a few harmed during the writing of this story.

It’s not every day a girl inherits a condom company, and to say accountant Alice Beasley is astonished and out of her depth is putting it mildly. For an almost virgin, she needs a quick education in all things condom because her inheritance is in danger. Someone is intent on sabotage and trying to destroy her new company.

Alice wants James. She craves his talented touch and sultry kisses, she desires passion and physical pleasure on a permanent basis but first she must convince bad-boy James to give up his fancy-free ways.

Review:
The last thing Alice is expecting when she goes to the reading of her godmother's will is that she is about to inherit a condom factory. The fact that she has to agree to run the factory for 6 months in order to keep her inheritance makes her more than a little nervous but she has always wanted to feel financially secure and this is the perfect opportunity. With someone causing all kinds of incidents at the factory it soon becomes clear that Alice's future isn't quite as secure as she thought it would be though and she becomes even more determined to make sure the business is a success. Alice finds herself working closely with the factory manager James and it isn't long before the sparks between them start to fly, so, when they need to keep the testing for a new range of condoms very closely monitored, it seems only natural for them to carry out the tests personally. Alice knows that James is planning on leaving the town when his six month contract is up but surely she can enjoy a few months of hot sex without ending up heartbroken when he is gone?

Fancy Free is a very light hearted and amusing erotic romance, the characters are quirky, the sex is plentiful and it was a very quick and easy read that kept me entertained. I did have a few issues with the story but overall I'd have to say I liked it. Alice is very innocent and quite naive at the beginning of the story, she is dating someone who treats her like dirt and seems to constantly put her down all the time but thankfully she has a backbone and she quickly kicks him to the kerb when she realises how much he has always taken her for granted. She has very little experience with men and sex so she is quite shocked by the products the factory makes and by the way her new colleagues discuss everything so openly. It was quite amusing watching the others tease her and it doesn't take her too long to let her inner bad girl out to play.

The chemistry between her and James was great, in a lot of ways they are opposites but he seems to really respect her and they make a good couple. The sex was undoubtedly hot but I have to admit there were a few instances where the words used turned my stomach rather than turned me on - I don't think it is possible to use the word squelch in a sex scene without making me cringe and it was used twice on the same page at one point which was more than a little off putting. Luckily that wasn't the norm though and most of the interactions between Alice and James had me fanning myself. I would have liked to have got to know James a little better, I never really felt that we got to know what really made him tick and I especially would have liked to have seen more of a confrontation with his mother and sister after the way they treated both him and Alice so badly.

I found the plot about who was trying to sabotage the factory interesting and I hadn't guessed the outcome until just before the big reveal. I did end up feeling very confused when the story jumped forward in time by 3 months though. It would have made sense if something had changed during that time gap but it hadn't - in fact the creepy stalkers who were harassing Alice with weird gifts and by following her around the town dressed in strange costumes had taken a break from contacting her for the 3 months and only started causing again when when the story was picked up. I couldn't understand why the stalkers suddenly stopped for 3 months or why Alice hadn't thought to mention it to anyone in all that time in spite of the fact that is what she had been so scared by their actions. I found things made a lot more sense when I pretended that the 3 month gap had just never happened so that's exactly what I did. Overall Fancy Free was a fun story with a cute romance and a little suspense around the factory sabotage. It was my first book by Shelley Munro and I enjoyed it enough to check out more of her books in the future.

Source: Received from Book Monster Promotions in exchange for an honest review 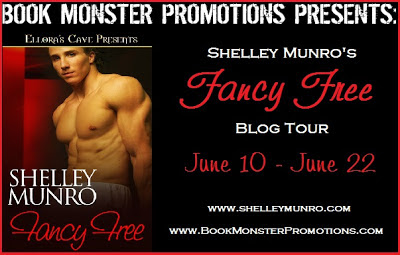 As part of the blog tour Shelley Munro is giving away a $20 Amazon voucher. You can enter the giveaway using the rafflecopter widget below. The winner will be contacted directly by Shelley to arrange sending the prize.