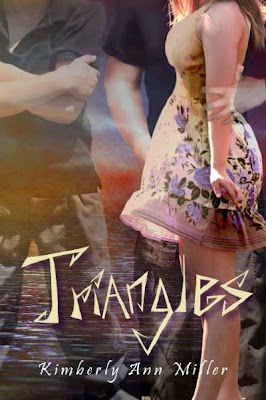 In the Bermuda Triangle - a lot.

Hoping to leave behind the reminders of her crappy life - her father's death years ago, her mother's medical problems, and the loser who's practically stalking her - seventeen-year-old Autumn Taylor hops on a ship with her sister for a little distraction. When she wakes up in the Bermuda Triangle, she fears she's gone nuts for more than one reason: that loser's suddenly claiming they're a happy couple . . . a hot guy is wrapping his arms around her and saying "Happy Anniversary". . . and suddenly, she's full of bruises, losing her hair and getting IV medication. Autumn visits the ship's doctor, hoping for a pill or a shot to make the craziness go away. Instead, she's warned that these "alternate realities" could become permanent.

She just has to ask herself one question - how the hell is she going to get out of this mess?

Review:
Autumn hasn't had it easy, her father was killed in an accident years ago and her mother has been in hospital for months so she lives with her older sister Jessica. She is desperate to save up enough money so that she can move away from home and what's left of her family. The sisters may not have much to celebrate but Jessica is insisting that they take the cruise trip to Bermuda that their mother spent years planning. Autumn is just looking forward to getting away from normal life for a few days but she's in for a nasty shock when she discovers the boy who is practically stalking her is also on board. Then when the ship enters the Bermuda Triangle things start to get really weird, each day Autumn finds herself in a different twisted version of reality, one moment she's married to her stalker, the next she's dating someone else and on the third day she is battling cancer. Is she losing her mind or is she experiencing alternative realities? Can she get her real life back or is she going to end up trapped in a new one?

As soon as I heard about Triangles I wanted to read it, I don't think I've read any other books set in the Bermuda Triangle and the idea of alternate realities has always intrigued me so it sounded right up my street. Unfortunately although I loved the premise of this book I didn't enjoy it as much as I hoped I would, mostly because I absolutely hated the main character. I also think I expected the story to focus more on the mystery of the Bermuda Triangle rather than the romance between Autumn and the two love interests Joey and Marcus. One thing I will say I was happy with is the fact that this isn't quite a typical love triangle. The different versions of reality allow Autumn to experience life with both boys and see into two very different potential futures.

Characters can make or break a book for me and in this case I struggled to find anything likeable about Autumn which really wasn't good when the whole story is told from her perspective. She is seventeen but in a lot of ways she comes across as much younger and spends much of the book acting like a spoilt child. She is selfish and self-centred and she treats Joey appallingly considering he has never done anything nasty to her. Joey is someone who works with Autumn and he obviously has a huge crush on her and doesn't really know how to get her to go out with him, he does have an annoying habit of following her around like a love sick puppy but he actually seems like a really sweet and caring guy - just a little too over eager. To be honest I couldn't for the life in me figure out what he saw in her, she spends most of her time ignoring him and when she isn't doing that she is either being nasty to him or bossing him around sending him on errands to fetch her things for her. I ended up getting really irritated with him because he just puts up with everything she throws at him and never says a word, in the end as much as he's a nice guy who didn't do anything wrong he was just too much of a wet blanket for me to root for him as a potential hero of the story.

The other potential love interest, Marcus, is a nasty piece of work who is only interested in getting into girls knickers and couldn't remain faithful if his life depended on it. Autumn knows his reputation because he dated her sister once but of course she is immediately interested in him because he's hot. There was just nothing likeable about Autumn, she acts like a bitch to everyone around her, even complete strangers, but especially her sister and Joey. She turns every single situation around until it's all about her and how terrible her life is and I was sick of the way she practically begs for sympathy. I'll admit that her experiences on the ship does make her take a good look at herself and she starts to change but when you've read 80% of the story hating the main character that doesn't give her much time to turn your opinion of her around.

I don't think Triangles was a badly written book but it definitely didn't end up being the right book for me. That was completely down to Autumn though and I do think with a different main character (or a major adjustment) I could have enjoyed it a lot more. It has to say something that I actually finished the book though - I was curious enough to find out what was going to happen that I had to keep reading and not a lot of books could do that when I'm so passionate about hating the narrator! I wish there had been more of an explanation about what was happening in the Bermuda Triangle though and a little less focus on the romance.

Source: Received from Spencer Hill Press in exchange for an honest review.