Review: A Cursed Embrace - Cecy Robson + International Giveaway for a SIGNED copy of the book! 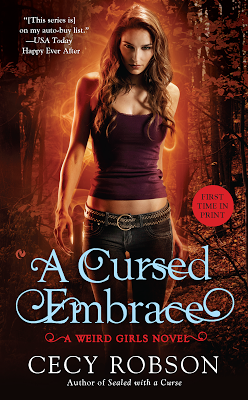 Celia Wird and her three sisters are just like other twenty-something girls—with one tiny exception: They are the products of a curse that backfired and gave each of them unique powers that made them, well, a little weird…

After Celia Wird and her sisters help master vampire Misha save his family, their powers are exposed to the supernatural community of the Lake Tahoe region. But fame comes at a price, and being “weird” isn’t always welcome.

To make matters worse, Celia desires the love of Alpha werewolf Aric, but his pack is bent on destroying their relationship to preserve his pureblood status. And once weres start turning up dead—with evidence pointing to the vampires—she must face the prospect of losing Aric forever. But the chaos only masks a new threat. An evil known as the Tribe has risen—and their sights are set on Celia and her sisters.

Review:
Having defeated their enemy and saved Misha and his family things should be settling down for Celia and her sisters, especially since they have started to get so close with werewolf alpha Aric and some of his warriors. Unfortunately nothing is ever simple for the girls and Aric's pack is determined to keep him and Celia apart. As if the pack politics weren't enough for them to deal with bodies start piling up as an unknown enemy starts chowing down on both humans and weres. Evidence points to the vampires but Celia knows that Misha can't be involved and is determined to uncover what is really going on. When it becomes clear that Celia and her sisters all have targets painted on their backs they realise they are in for the fight of their lives and even though they have both the weres and the vampires at their backs they might not be strong enough to survive.

I really enjoyed the previous stories in the Weird Girls series but A Cursed Embrace surpassed all of my expectations and completely blew Sealed with a Curse out of the water. This is quickly turning into one of my favourite urban fantasy series and I can't wait to see where Cecy Robson takes things next. These books really do have everything I look for in a good story - great characters, fabulous banter and a family bond that always comes first, humour, action and plenty of hot guys to drool over! A Cursed Embrace took me on an emotional roller coaster that left me reeling at the end, I felt everything right alongside Celia - her joy, happiness and love followed by her shock, horror and despair. Everything that she went through happened to me too and it's not often that I feel so connected to a character I that want to cry her tears for her.

Celia is a fighter, she has spent years protecting her sisters and she will do anything to keep them safe no matter what it costs her personally. She always puts everyone else first but has never really had anyone who was there to look out for her, as the oldest she took responsibility for the others and although they appreciate everything she has done for them it would be nice for someone to look out for her for a change. That is one of the things I loved most about Aric, the way he stands up for her and has her back no matter what anyone else says. I'll admit that meant I was disappointed with his actions later in the book, I understand why he did what he did but that doesn't mean it hurt me any less when he did it. I don't want to say too much here for fear of spoiling the story for you but I know what I'm hoping for as the series continues and I'll definitely be waiting for Aric to redeem himself!

A Cursed Embrace had me hooked from the very first page, the plot was fantastic, their enemies were creepy and horrifying and I had my heart in my mouth several times in absolute terror about what was about to happen. By the time I reached the end I felt like I'd been through the emotional equivalent of my washing machine spin cycle, I had been through every single possible emotion (some more than once) and I was left reeling at the end of it. The end of the book made me gasp out loud and I don't know how I'm going to survive the wait for the next book! If you haven't come across this series then I really can't recommend it highly enough, I would suggest reading the books in order though because you'd miss out on some important character development if you started part way through. Cecy Robson has now become one of my auto buy authors and I will be devouring anything else she publishes the second I can get my hands on it! 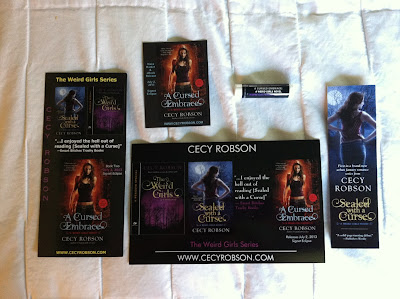 I'm thrilled to be taking part in the blog tour to celebrate the release of A Cursed Embrace and thanks to Cecy Robson I'm hosting a fabulous giveaway so that one of my readers will be able to win a signed copy of A Cursed Embrace along with a swag pack (containing a bookmark, rack card, magnet, lip balm and signed postcard). Cecy is offering a giveaway at each stop on the blog tour so you can enter as many of the giveaways as you like to increase your chances of winning (find a list of all the tours tops on Cecy's website here).
a Rafflecopter giveaway