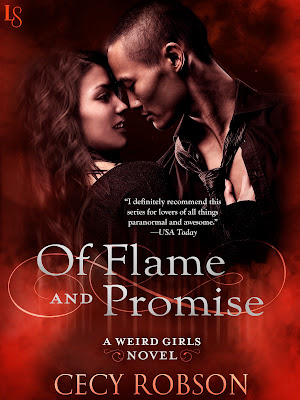 Perfect for fans of Keri Arthur and Bella Forrest, this short novel kicks off a sizzling new series in the award-winning Weird Girls saga as Celia’s sister Taran fights to have it all: independence, hot romance, and enough firepower to torch an army of blood-thirsty supernaturals.

Cursed by a spell meant to destroy them, Taran Wird and her sisters instead developed unique magical talents. With the power of fire and lightning literally at her fingertips, Taran doesn’t fear much. Demons, vamps, whatever—bring ’em on! Only one thing terrifies her: commitment.

Taran is crazy about her boyfriend, Gemini, a sexy were with the incredible ability to split into two separate wolves. But after watching her sister go through heartbreak with the pack’s Alpha, Taran knows not to count on happily ever after—despite Gemini’s desire to claim her as his mate. Reluctantly, she agrees to meet his very traditional and conservative parents. Taran’s a badass with a mouth to match, and Gemini loves her for it. She’s just not positive these attributes will please Mom and Dad.

Unsurprisingly, every attempt by Taran to bond with Gemini’s folks proves disastrous. But in the end, Taran finds that winning them over means unleashing her powers . . . and proving that this foul-mouthed fire-starter is a force to be reckoned with.

Review:
I absolutely love Cecy Robson's Weird Girls series so I was thrilled to find out that the series was continuing beyond Celia's story and that we were going to get to know her sisters a little better. Of Flame and Promise gives the second oldest Taran a chance to shine and I really loved getting to see inside her head. I was expecting Taran's story to pick up where A Curse Unbroken left off but it actually backtracks a little and gives us a chance to see some of Celia's story from a different point of view. I think that it slots into the timeline somewhere in the middle of Cursed by Destiny (the third book in the series) but I can't swear to that and I'm not sure if the plot takes us beyond that book so I would recommend reading Of Flame and Promise after A Curse Unbroken just to make sure you don't end up with accidental spoilers. In fact, for the purpose of this review I'm going to assume you've already read the first five books so if you're not up to date I would recommend looking away now.

If you think back to Cursed by Destiny you'll probably remember that Celia and Aric are in a very bad place, they may be mates but Aric has been forced to walk away from Celia because of the pack elders and they're both pretty heartbroken over it. It was pretty tough watching Celia and Aric's relationship falling apart all over again but it was interesting to see how it affected Taran. What I liked was that Taran got to see more of Aric's side of the story, something we didn't see as much of when the story was told from Celia's point of view.

It's not only their relationship that is suffering though, Taran was already pretty sure that Gem would break her heart eventually and now she's convinced that their relationship is doomed. The sisters have never really had anyone to rely on apart from each other and Taran is probably the one that feels that the most, she has trouble trusting people at the best of times but Gem had been slowly winning her around and she does love him more than anything. She even believes that he loves her too but having watched Aric walk away from the mate bond she can't trust that Gem won't end up doing the same to her. Gem wants nothing more than to have Taran accept the mating bond but she's scared and when he asks her to meet his parents she's even more nervous.

I have to say Taran meeting her future in laws was absolutely hilarious. Taran is loud mouthed, feisty and very opinionated, she has strong magic that she isn't afraid to use but she's just as likely to defend herself or the people she cares about with her sharp tongue and she's not exactly the easiest going of the sisters. Luckily Gem loves her unconditionally but his parents are very conservative and she is not the kind of girl they expected their son to fall for. Unfortunately for Taran everything that could possibly go wrong did go wrong, no matter how hard she tried to make a good impression it was a complete disaster and I spend half of the book laughing at the craziness. Taran does eventually get the chance to show Gem's parents what she is made of though and when the fighting starts it's just as action packed as you'd expect from this series.

Of Flame and Promise was a lighter in tone than some of the later Weird Girls novels but it still contains everything that makes this series so much fun to read. I'm definitely looking forward to reading more of Taran's story and I'm really hoping that we're going to get books about Emme and Shayna too.