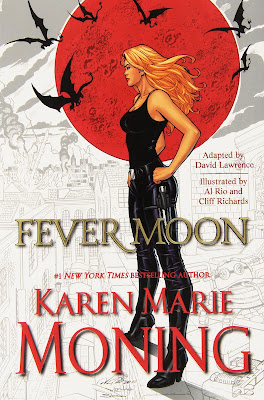 In Fever Moon, we meet the most ancient and deadly Unseelie ever created, the Fear Dorcha. For eons, he’s traveled worlds with the Unseelie king, leaving behind him a path of mutilation and destruction. Now he’s hunting Dublin, and no one Mac loves is safe.

Dublin is a war zone. The walls between humans and Fae are down. A third of the world’s population is dead and chaos reigns. Imprisoned over half a million years ago, the Unseelie are free and each one Mac meets is worse than the last. Human weapons don’t stand a chance against them.

With a blood moon hanging low over the city, something dark and sinister begins to hunt the streets of Temple Bar, choosing its victims by targeting those closest to Mac. Armed only with the Spear of Destiny and Jericho Barrons, she must face her most terrifying enemy yet.

Review:
I actually bought this book over 2 years ago because I completely love the Fever series and had to have every possible story available but since I've never really been a big fan of graphic novels I kind of stuck it on a shelf and never got around to reading it. Then recently friends introduced me to Saga (amazing graphic novel series BTW!) and I realised that I do quite like GNs after all, add that in with a Fever series reread and of course I had to FINALLY read Fever Moon.

I'm going to admit that it took me a little while to get used to the artist's idea of Mac and Barrons, they just aren't how I pictured them but that's the trouble when you go from a normal book series where you've spent years filling in the blanks with your own imagination to a graphic novel set in the same world where you're forced to accept the artist's impression. It's a little bit jarring at first (well it was in my case anyway) but there is no denying how beautiful the artwork is in Fever Moon and the characters quickly grew on me. It's not going to change the way I see everyone when I read the main novels but I the cartoon versions are easily recognisable and it was fun spotting so many of the character's I already love.

It's hard to decide exactly where this story fits into the Fever world timeline but it must happen sometime in the middle of events in Shadowfever so I would highly recommend waiting until you've finished that book before picking this up. If you have read Shadowfever you'll recognise the Fear Dorcha that Mac met at the bar in Chester's when she was having a conversation with the dreamy eyed guy and I thought that was a really nice way to tie the two stories together. The Fear Dorcha was a truly creepy villain so I'm glad we got a chance to find out more about him and it was interesting to see the way Mac handled coming so close to losing the people she cared about.

While I wouldn't say it's essential to read this story it is a really nice extra that I'm sure most fans will enjoy. The artwork is fabulous, the story was interesting and fit the graphic novel format really well and I thoroughly enjoyed reading it.