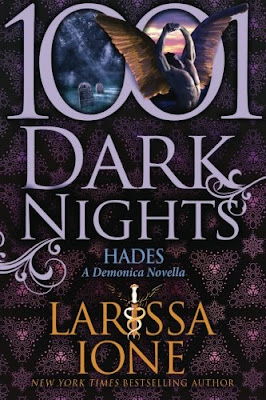 A fallen angel with a mean streak and a mohawk, Hades has spent thousands of years serving as Jailor of the Underworld. The souls he guards are as evil as they come, but few dare to cross him. All of that changes when a sexy fallen angel infiltrates his prison and unintentionally starts a riot. It’s easy enough to quell an uprising, but for the first time, Hades is torn between delivering justice — bestowing or mercy — on the beautiful female who could be his salvation . . . or his undoing.

Thanks to her unwitting participation in another angel’s plot to start Armageddon, Cataclysm was kicked out of Heaven and is now a fallen angel in service of Hades’s boss, Azagoth. All she wants is to redeem herself and get back where she belongs. But when she gets trapped in Hades’s prison domain with only the cocky but irresistible Hades to help her, Cat finds that where she belongs might be in the place she least expected . . .

Review:
I absolutely love Larissa Ione's Demonica series and I really miss the world and the characters so I'm thrilled that she's still writing the occasional novella for fans to dive into. Hades has made appearances throughout the series but he's never been a central character, mainly because Azagoth has kept him pretty much confined to Sheol-gra as punishment for something he did thousands of years ago.

Anyway, I was really excited to get to spend some time with Hades and I loved Larissa Ione's take on him, she's very, very good at showing her bad guy's softer side and she did this perfectly here. All Hades really wants is to be allowed to live his life in peace, he doesn't like being trapped in Sheol-gra but he knows he plays an important role and he would just like to be able to leave occasionally for a change of scenery. Unfortunately Azagoth is not someone who forgives easily and he's nowhere near done with Hades' punishment.

We've also met fallen angel Cataclysm in previous books, she was one of the angels who was tricked into helping Gethel, almost bringing about the apocalypse, and it cost her everything. Cat is currently living and working in Azagoth's home but she's desperate to win back her wings and will do whatever it takes to become an angel again. Unfortunately Cat's name suits her and she is a walking disaster area, pretty much everything she touches leads to trouble and no matter how good her intentions are she always ends up making things worse.

This novella was hilarious, Cat causes so much trouble for poor Hades even though all she's trying to do is help him. Azagoth was about ready to have a fit because of it and I think it's only down to Liliana's influence that both Cat and Hades even survived to the end of the book. The couple have fantastic chemistry, their relationship develops fairly quickly but I expect that in a novella and it never felt overly rushed in any case. My only complaint was that the uprising in Sheol-gra was dealt with a little too quickly and easily but that's a really minor issue that didn't bother me a great deal.

I miss this series so much and will happily take any opportunity to revisit it so I'm excited that I have a couple of novellas to go and I'm still hoping that Larissa Ione may decide to give us a few more full length novels too.