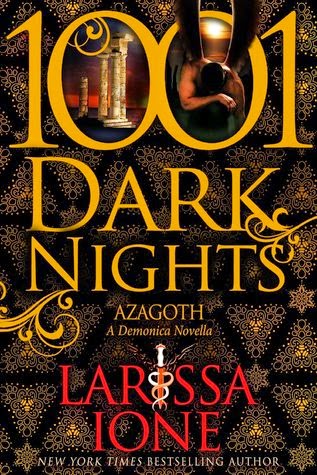 Even in the fathomless depths of the underworld and the bleak chambers of a damaged heart, the bonds of love can heal . . . or destroy.

He holds the ability to annihilate souls in the palm of his hand. He commands the respect of the most dangerous of demons and the most powerful of angels. He can seduce and dominate any female he wants with a mere look. But for all Azagoth’s power, he’s bound by shackles of his own making, and only an angel with a secret holds the key to his release.

She’s an angel with the extraordinary ability to travel through time and space. An angel with a tormented past she can’t escape. And when Lilliana is sent to Azagoth’s underworld realm, she finds that her past isn’t all she can’t escape. For the irresistibly sexy fallen angel known as Azagoth is also known as the Grim Reaper, and when he claims a soul, it’s forever . . .

Review:
I love Larissa Ione's Demonica series so it was no surprise that I devoured Azagoth and enjoyed every minute of it. In fact I think my only complaint was that I wanted more, not because I was disappointed with the story we were given but because I loved both of the main characters and wanted to spend more time with them.

Azagoth used to be a powerful angel but he gave it all up to become the demon Grim Reaper and create Sheoul-gra, a kind of holding tank for Demon souls after they die. We've come across his character a few times throughout the Demonica series but we never knew a great deal about him and it was really interesting to learn about why he made the choices he did and how much he has suffered because of those decisions. Azagoth has spent centuries alone and he is sick of being used by heaven to boost the ranks of the Memitim. What he really wants is a mate, someone he can build a bond and share his life with. Lilliana is an angel who works in the time travel department but she broke a major rule and is now facing punishment. Raphael gives her two choices, she can either agree to be Azagoth's mate or they will either strip her of all her powers. Neither option really appeals to her but she can't bear the thought of losing her abilities so when Raphael offers her a third choice - steal an artefact from Azagoth's realm - she knows it is the only sane choice. That was before she met Azagoth though and the more time she spends with him the harder her decision becomes.

I absolutely loved Azagoth, in a lot of ways he is such a vulnerable character - he has spent so long alone and hiding his emotions that he doesn't know how to cope when he starts to feel for Lilliana. I loved how patient he was with her and that he was determined to make her fall for him rather than force her into doing something she didn't want. His reactions when Lilliana was able to take him outside of Sheoul-gra were perfect and no matter how much she tried to irritate him he was just so excited to experience something new that she couldn't get under his skin. Lilliana was a great character too, she has a lot of backbone and isn't the kind of woman who just sits back and lets things happen. She isn't stupid either and she knows that Raphael has an agenda of his own so rather than blindly follow his instructions she takes the time to work things out for herself and decide how to proceed. She does make a couple of mistakes but I loved how hard she worked to try and put things right.

Azagoth may be a novella but there was still plenty of character development and I loved the chemistry between the couple. Their romance was scorching hot but also incredibly sweet and I often found myself smiling at the banter between them. If you're a fan of the series then I'm sure you're going to love this story just as much as the others.