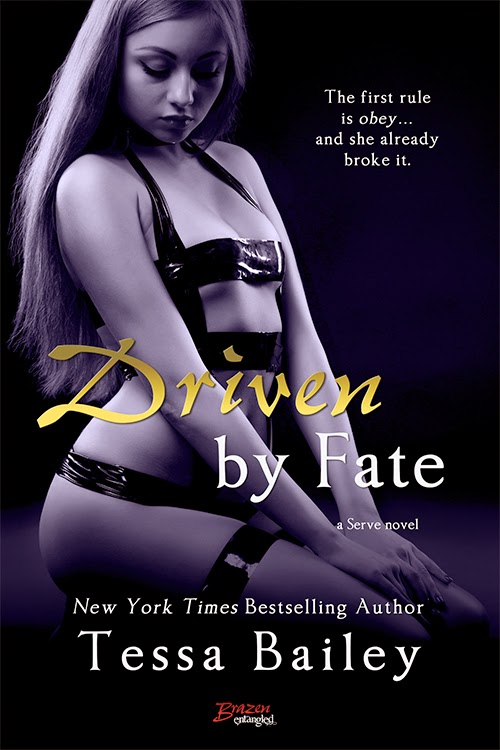 The first rule is obey . . . and she already broke it.

Francesca "Frankie" De Luca always pays her debts. Even when it means stepping inside Serve, the sensuous Manhattan club that caters to particular adult desires. For Frankie, it's a taste of something she's always wanted—and never received. Until a sharply dressed Brit orders her into his room, and instructs her to undress before delivering the carnal punishment she so desperately needs . . .

She wasn't the woman Porter Evans was expecting. Not this wild thing with the pale, silvery eyes. And such cheek. But she violates Porter's strict rules of control. Temptation is a dangerous thing indeed. Yet everything about Frankie cries out for schooling about the tantalizing interplay of pleasure and pain. So Porter offers Frankie a deal she can't refuse—and the only thing she owes him is submission . . .

Review:
Driven by Fate is the fifth book in the Serve series (the third by Tessa Bailey as the other two were written by Katee Robert) and although we've briefly met both of these characters in a previous instalment you don't actually have to read this series in order to be able to enjoy each story.

Frankie has wanted to explore her submissive fantasies for a long time now but visiting Serve to repay a debt gives her the perfect opportunity to test the waters. Porter knows Frankie isn't the woman he was waiting for from the second she steps into his private room but against all common sense he can't resist taking what she's offering. The two of them have explosive chemistry and neither of them is quite ready to let it end after just one session but with Porter due to return home to England in a matter of weeks someone might end up getting their heart broken if they get in too deep.

I've been intrigued by British Dom Porter since we first met him in one of the earlier novels in the series so I have to admit to being more than a little excited when I found out that this was his story. I had a feeling he'd be intense and I was right! Tessa Bailey always writes such great dirty talking heroes and Porter is as dirty as they come so you can expect some incredibly hot sex scenes when you pick up this story. I've had a few issues with some of this author's previous heroines but I found myself really liking Frankie, she's a feisty woman who knows what she wants and isn't ashamed to admit it. As much as she fantasises about being dominated in the bedroom she is far from submissive in the rest of her daily life so she definitely keeps Porter on his toes. I thought they had great chemistry and I enjoyed seeing the two of them together but what stopped this from being a five star read for me was the fact that I wanted more depth to both of their characters. We learn a lot about Frankie but Porter is more of a mystery and I would have loved to explore more of his past to see exactly what made him tick.

Driven by Fate is a fab read though and I'm really enjoying this whole series, as a long term fan of both Tessa Bailey and Katee Robert any future books will automatically be added to the top of my wish list.