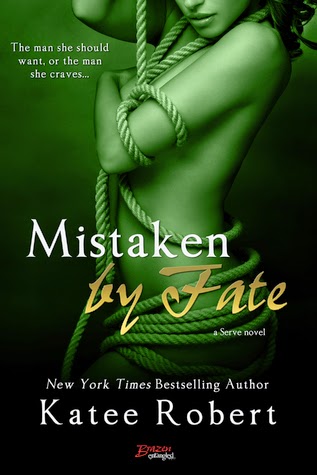 Former soldier Garrett Reaver hasn't ever gotten Ridley out of his system. And now that she's before him in all her submissive glory? He'll be damned before he lets someone else have her, especially his brother. Because Garrett and Ridley have some seriously unfinished business to take care of, and it starts now. And this time, he'll show Ridley how exquisite a relationship with him could be . . . if their past doesn't catch up to them first.

Ridley has never got over the crush she had on her best friend's older brother Garrett but he broke her heart six years ago when he walked away and she has decided that it's about time for her to move on with her life. She's decided that the perfect guy for her to settle down with is Garrett's twin brother Will and she heads out to the Serve BDSM club determined to seduce him. After an amazing, passionate scene at the club Ridley is horrified when she removes her blindfold to see not Will but Garrett is the guy who just made the earth move. Garrett walked away from Ridley once because he was scared she would break his heart but after the night they've just shared he can't bring himself to leave for a second time. Can he convince her to give him a second chance and even if he does will he be able to put his fears behind him enough to start a meaningful relationship?

I love second chance romances and I love dirty minded bad boys so Mistaken by Fate was right up my street. Garrett definitely ticks the dirty talker box and both he and Ridley get off on a little exhibitionism which leads to some incredibly erotic encounters between the two of them. I loved seeing them together, Garrett had a really sweet side but he was so scared of being hurt that he kept pushing Ridley away. I was pleased that Ridley didn't let him walk all over her, as much as she liked giving him control in the bedroom she didn't let him push her into anything she wasn't comfortable with and she was sensible enough to fight for what she needed too. I have to admit I was a little confused about their history, I could never quite work out if they'd been in an actual relationship before he left or whether they'd just been friends on the verge of something more. It wasn't the end of the world but I really would have liked a little more background and I think I would have found the end of the story a little more believable if they'd had more of a conversation about what had happened between them in the past. That was my only issue with the story though and I enjoyed everything else about it.

If you're looking for a story with a dirty minded hero and a heroine who is up for pretty much anything then you're bound to enjoy Mistaken by Fate. I'm definitely hoping that we get at least two more stories from Katee Robert in this series because I'm dying to know more about Garrett's twin brother Will and their younger sister Sara.