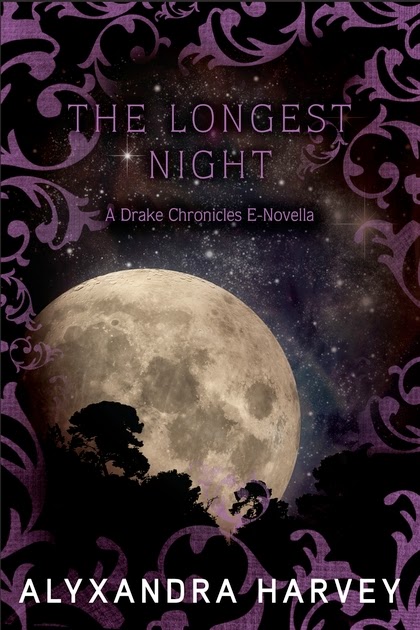 Since the Blood Moon battle six years ago, Lucy, and her hot vampire boyfriend Nicholas Drake, have kept the peace between the vampires of Violet Hill and the Helios-Ra hunters. But breaking up fights between rogue hunter Aggie and irresistible rebel Callahan is proving a big challenge; Aggie just can't accept that behind Cal's burning blue eyes, he is in control of his bloodlust. As Lucy's best friend and Nicholas's sister, Solange, return home for the group's Winter Solstice celebrations, Aggie struggles to admit the real reason she finds Cal a threat – and risks far more than her heart . . .

An action-packed tale of dark romance from the author of the bestselling Drake Chronicles series. The perfect way for fans of Stephenie Meyer, L.J. Smith and Rachel Caine to enjoy the long winter nights.

Review:
The Longest Night is a short novella that is set about 6 years on from events in Blood Prophecy and it was absolutely fantastic to catch up with a 23 year old Lucy now she's out of school and doing her own thing.

Never one to settle for an easy life Lucy and Nicholas have opened up their home to take in troubled teenagers, both Helios-Ra and vampires alike. They have spent the last few years building cooperation between the vampires and the Helios-Ra but there will always be some who don't want to abide by the truce and those are the teenagers that Lucy is determined to help no matter how difficult they make her job. One particular teenager is really giving her grief - Aggie is a young girl who lost the sister who raised her in the Blood Moon massacre. She finds it impossible to trust any vampire and is convinced that they are all evil monsters who are just waiting for any chance to attack and she's more than willing to hurt them before they get a chance. Can Lucy persuade her that some vampires are good and sometimes it's the humans who are the monsters?

I loved getting the chance to catch up with older versions of Lucy and Nicholas along with some of the other characters like Solange, Kieran, Hunter and Quinn. I have to admit I wasn't so sure about the newer characters to start with though, Aggie in particular irritated me to start with but she really grows up throughout the story and I liked her by the end. I do think that the events in Blood Prophecy would have a long term effect on all the people who were caught on the sidelines so I enjoyed seeing that side of things explored. It made me sad that there was still so much bad blood between the Helios-Ra and the Drakes though, I had hoped the hunters would have learned their lesson and moved forward a little more.

The Longest Night was a nice addition to the series though, it's not a good place to start if you haven't read the books but if, like me, you're missing the Drakes and looking for another fix then I'm sure you'll enjoy it as much as I did.