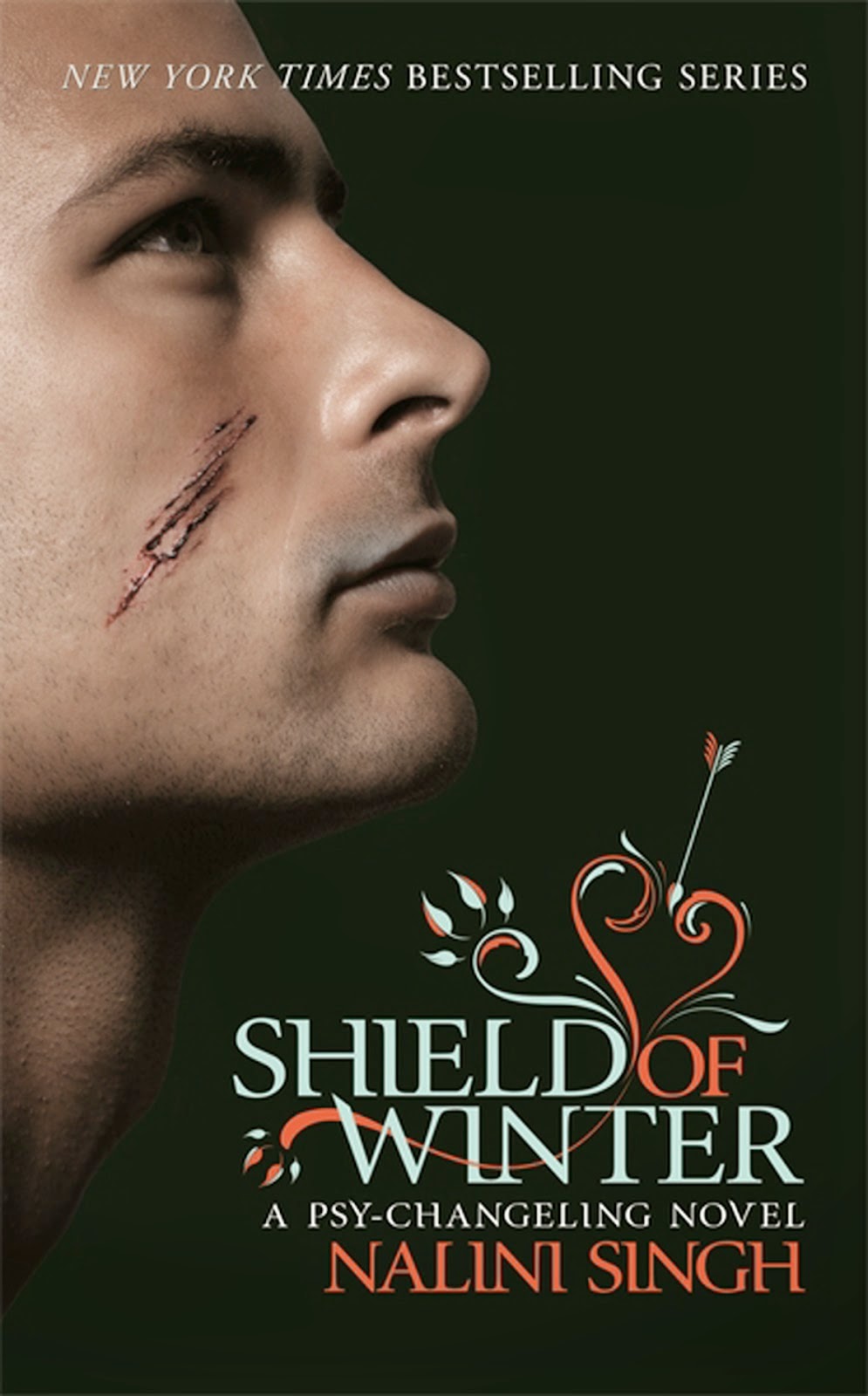 Assassin. Soldier. Arrow. That is who Vasic is, who he will always be. His soul drenched in blood, his conscience heavy with the weight of all he's done, he exists in the shadows, far from the hope his people can almost touch - if only they do not first drown in the murderous insanity of a lethal contagion. To stop the wave of death, Vasic must complete the simplest and most difficult mission of his life:

If the Psy race is to survive, the empaths must wake . . .

Having rebuilt her life after medical 'treatment' that violated her mind and sought to stifle her abilities, Ivy should have run from the black-clad Arrow with eyes of winter frost. But Ivy Jane has never done what she should. Now, she'll fight for her people, and for this Arrow who stands as her living shield, yet believes he is beyond redemption.

But as the world turns to screaming crimson, even Ivy's fierce will may not be enough to save Vasic from the cold darkness . . .

Review:
Nalini Singh has done it again and Shield of Winter is a FANTASTIC instalment to the Psy-Changeling series. Every time I think it can't possibly get better she works her magic and blows my mind with her amazing characters! I have been dying to read Vasic's book for ages now and I loved every minute of it.

It's been painful watching Vasic's deterioration over the last few books, he has come closer and closer to the edge and you could feel how tired he was of living with the things he'd been forced to do since childhood. Although we've seen for ourselves how much Vasic has to offer he never sees the good in himself, all he can think about is the lives he has taken in his role as an Arrow and how much he regrets his past. The fact that he feels so much guilt shows us that his conditioning isn't quite what it should be, even at the height of Silence he was obviously showing signs of fracture and the symptoms are only getting worse.

Aden is like a brother to Vasic, they have been friends since childhood and always did their best to protect each other but being raised by a man like Ming was never going to be easy and we all know how rough the Arrow's have had it. I absolutely love the bond between these characters though, Aden is determined to do whatever it takes to stop Vasic from self destructing and he is making sure to send him on jobs that aren't going to make him suffer even more. I think this is a really interesting time for the Arrows, we're getting to see them making their own minds up about a lot of things, Silence included, and they're starting to see that there are other options open to them.

To give Vasic something positive to focus on Aden puts him in charge of protecting a group of E designation Psy, these empaths may just hold the cure for the rot that is spreading across the Psy-Net and it is vital that they succeed or it could be the end for the entire Psy race. Vasic has always had strong protective instincts but Ivy is like no one else he's ever met before and spending time with her changes him in ways he could never have imagined. Their relationship is one of the sweetest Psy/Psy relationships we've seen and I loved every minute of it. Ivy is a fantastic character, as an empath she was never able to successfully hold onto Silence so she is used to feeling deeply and isn't as cold as some of the previous characters were in the beginning. It was wonderful to see how Ivy instantly warmed not just to Vasic and Aden but also to all of the other Arrows, she is a real beacon of hope for them and I think she's going to be the one who shows them all what it is like to have a proper family. I don't want to give spoilers so I'll just say that things get extremely interesting (and very, very funny) when the passion starts to build between Vasic and Ivy. There was a particular conversation when Vasic askes Judd for advice that was absolutely priceless. You've got to give these Psy guys credit - they like to do their research and it more than pays off for the lucky ladies in their lives.

Shield of Winter was an emotional roller coaster, one minute I'd be laughing out loud and the next I would be heartbroken and crying for everything that both Vasic and Ivy have been through. This was a really heart wrenching read so it needed the humour to lighten it up but Nalini Singh got the balance just right. I loved seeing how things are progressing in the world since the major changes in the last book, a lot of things are happening and it's sure to be a bumpy ride but I'm pleased with the direction things are taking. My only worry is that I've now got to somehow survive the wait for Shards of Hope next summer, write faster Nalini please, please, please write faster!!