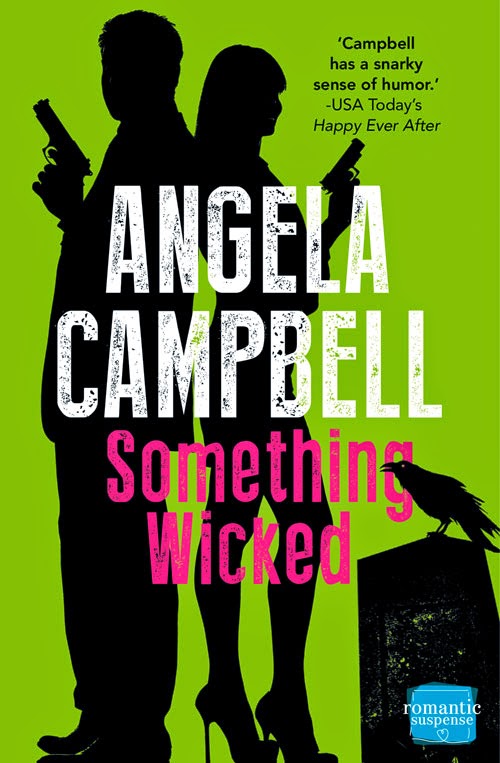 Something wicked this way comes . . .

All homicide detective Dylan Collins wants is a few hours of pleasure to take his mind off of the case haunting him. A serial killer is stalking the streets of Charleston, SC – a killer who calls himself The Grim Reaper. When the woman he'd just spent the night with turns up and offers her services as a psychic consultant on the case, his ardor quickly cools. Last thing he needs is to get tangled up with a con artist.

It doesn't take long for Dylan to realize Alexandra King is the real deal – and the killer's next target. Dylan's protective instincts battle his reluctance to get too involved with a woman he isn't sure he can trust. As they get closer to finding the killer, they also grow closer to one another, but will Alexandra's secret agenda destroy their chance at happiness – if the killer doesn't strike first?

Psychic Detectives Series:
On the Scent
Something Wicked
Spirited Away

Review:
We first met Alexandra when she helped Zach come to terms with his psychic abilities in the first book, since then she has started working for Zach at his private detective agency and has become very good friend's with Hannah. Alexandra has always been able to talk to ghosts but she currently being haunted by Zach's mother who is desperate to find a way to reunite her sons. Zach and Dylan haven't spoken to each other for years, Dylan believes his older brother abandoned him and has refused Zach's attempts to reconnect. The only way Alexandra is going to be able to stop their mother from following her around all day is to find a way of getting the two of them to talk to each other but Dylan is stubborn so it won't be easy.

As it turns out Dylan is in need of Alexandra's help for more than one reason, he is a detective currently on the hunt for a serial killer but the murderer is very good at covering his tracks and it could be that Alexandra's abilities are the only way they'll be able to catch him. Dylan doesn't believe in psychics though so he is very reluctant to accept Alexandra's help and he pushes against it for all he's worth. Unfortunately Alexandra catches the eye of the killer and it looks like she's going to be the next victim, unless Dylan can get past his prejudice and learn to work alongside her to stop him before it's too late.

Something Wicked is the second book in Angela Campbell's psychic detectives series and I enjoyed it just as much as the first. While it was the pets that stole the show in the first book (watch out for a guest appearance from Abbott the cat here - he's just as snarky and amusing as usual!) this time around the quirky humour is added by the ghosts that surround Charleston. Alexandra is like a ghost magnet and they are all drawn to her because of her abilities which leads to some amusing situations. I liked both characters, Alexandra is confident about who she is and is proud of her abilities. I loved the fact that she doesn't care if people believe her or not - she just gets out there and does her thing and passes on the information to the police. Dylan is stubborn and doesn't want to believe her but it doesn't take her long to prove herself to him. They have great chemistry and make a really cute couple.

The books in this series are all quick, fun reads that are full of humour and a nice amount of romance versus action and I'm looking forward to reading the third book Spirited Away.