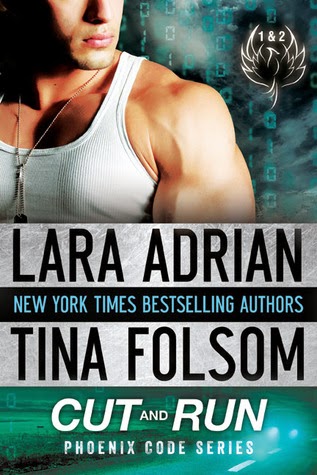 Darkly gifted and dangerously skilled, they were once the nation's most powerful asset. Betrayed by unknown enemies, unable to trust anyone--not even one another--the Phoenix hold the key to unmasking a conspiracy steeped in blood and fire. To survive, they'll have to solve . . . The Phoenix Code.

Community college professor Ethan Jones is living a lie. A precognitive agent known as Zephyr, Ethan is accustomed to subterfuge and deception, but when the Phoenix program is betrayed, he’s forced to cut all ties to the life he's made and everyone in it—including smart, beautiful Tori Connors, the one woman who tempted the cold agent to let down his impenetrable facade.

A chance encounter years later and thousands of miles away thrusts the lovers together again, and this time Tori refuses to let Ethan deceive her. Although he is a dangerous enigma, Tori still desires him, and soon their inconvenient reunion becomes a temptation too strong to resist. With assassins closing in, Ethan and Tori embark on a desperate race for their lives—one that will put their tentative trust to the ultimate test.

Motorcycle mechanic Scott Thompson isn't the laid-back loner he makes everyone believe. Three years ago, he was known as Ace, one of an elite group of agents in a top secret CIA program. However, the preternatural ability that made him invaluable to the government could now be his downfall, when his skill alerts him to a disaster bound to kill dozens of innocents unless he intervenes.

Journalist Phoebe Chadwick needs to persuade her editor to spare her from department cuts that threaten her job. When a mysterious stranger prevents an accident that would have killed her and many others, Phoebe goes after the story. But bad boy Scott is a reluctant hero unwilling to answer her questions, despite the sizzling chemistry that ignites between them. As his enemies hunt him down, Scott must decide if he can trust Phoebe—and how far he’s willing to go to keep her safe at his side.

Review:
As a huge fan of Lara Adrian I was really excited when I found out that she was starting a new series and I couldn't wait to read Cut and Run. I've never read anything by Tina Folsom before but thought this would also be a great way to try out a new author and hopefully add a whole new bunch of books to my to read mountain. Unfortunately although I think the Phoenix Code series has a lot of potential it didn't quite live up to my (admittedly high) expectations, I didn't hate the book but there were things about both stories that had me ready to throw my kindle across the room. I think both stories would have probably worked better for me if they were full length novels rather than novellas, that way we could have had a little more depth and build up to each of the relationships and I think that could have completely erased most of my issues.

The first story is Cut by Lara Adrian, it introduces us to College Professor, and undercover member of Phoenix a top secret paranormal group working for the CIA, Ethan and his long term girlfriend Tori. The couple have been dating for a year and are practically living together when Ethan receives an emergency alert telling him that Phoenix has been compromised and he must run for his life. Ethan walks out on Tori without a word leaving her completely devastated, she spends months searching for him, even checking with hospitals because she's worried something dreadful happened to him. Skip forward three years and their paths cross by accident when Ethan is in the middle of trying to escape from an assassin. The assassin sees him with Tori and now her life is in danger unless Ethan can protect her. I think I could have really liked Ethan if he'd shown more remorse for breaking Tori's heart. I understood why he'd had to leave and to a point I even understood why he didn't want to tell her what was going on because he didn't want to put her in danger, however I needed to see more grovelling for forgiveness on his part. I lost all respect for Tori when she forgave him pretty much within 10 minutes of him walking back into her life. She's spent three years miserable because of him and she forgives him so quickly? It just wasn't believable to me. Especially when she finds out that he had been lying to her and keeping secrets throughout the whole of their relationship. I think if they'd taken more time to get to know each other again and Ethan had made more of a show of apologising I would probably have been able to get on board with their relationship but the novella happened too quickly and it dulled my enjoyment of the story.

Run by Tina Folsom started off better, the hero Scott has precognitive abilities and he has a vision showing him the murders of a school bus full of innocent children. He knows that by helping them he risks exposing himself to the enemies who are trying to kill him but he couldn't live with himself if he didn't at least try to save them. Phoebe is a reporter who happens to be on the bus and she is rescued by Scott and even though Scott left the scene without giving anyone his contact details when her boss wants a story on the reluctant hero of the hour Phoebe becomes determined to track him down. Scott and Phoebe have great chemistry and I could get on board with the two of them falling in lust very quickly but it didn't make much sense that Phoebe would be so willing to drop everything in her life to go on the run with him. Their relationship moves from lust to love far too quickly and again I struggled to believe the connection between them. My other main issue with this couple (although this could be said for Ethan and Tori too!) was the fact that they are running for their lives from an unknown but powerful enemy who is trying to kill them yet they're willing to skip the condom when they jump in bed together. Not because Phoebe was on any other birth control but because Scott has a vision of them with children in their future. I'm sorry but it's not a good idea to risk making a baby with a guy you've known for 2 whole days and it's even more ridiculous that both couples seem willing to bring children into a mess where they have assassins chasing them. Who is going to babysit when they're off fighting for their lives?

I think that because Lara Adrian is one of my favourite authors I go into her books with incredibly high expectations and that's probably part of the reason for my disappointment with Cut and Run. I probably over thought some of the issues with these stories but when one thing about a book really annoys me I do tend to find that other smaller things bug me more than usual. I didn't hate this book and I do think the series has a lot of potential. I love the idea of the Phoenix group, I'm intrigued by the vision that Scott and Ethan seem to share and I'm very curious to see how they manage to track down the rest of the team. I think the overreaching plot is going to be a really interesting one and I'm hoping that the issues I had with these two stories won't carry over into the next book. I am definitely planning on buying Hide and Seek when it releases next year and I'm hopeful that the series will just get stronger with every book.