Review: Rumour Has It - Jill Shalvis 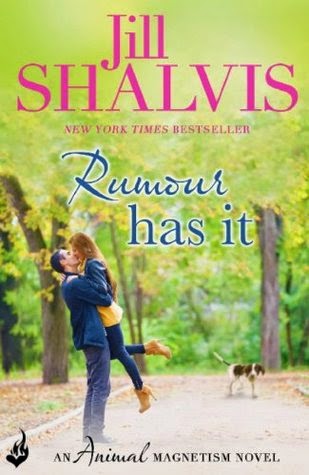 Special Ops solider Griffin Reid doesn't exactly have happy memories of growing up in Sunshine, Idaho. But when he returns to recover from a war injury, he finds comfort in the last person he'd expect.

Teacher Kate Evans harbours dreams of graduate school and a happily-ever-after, desperate to break out of the memory of Sunshine. Luckily, a certain sexy man has just come back into her life.

Until now, Griffin has seen Kate as simply little sister's friend. But as they both attempt to forge their paths, they must decide if their passionate connection can turn into something more lasting . . .

Review:
Kate has spent her whole life putting everyone else first, she may live on her own but she is constantly round at her Dad's house taking care of him and her younger siblings and even though she has been offered a scholarship to the graduate training course of her dreams for several years in a row she's never felt able to go and leave her family behind to take care of themselves. For once she wants to do something just for herself and the return of her best friend's sexy older brother Griffin gives her the perfect opportunity. Kate has had a crush on Griffin for as long as she can remember but he's never looked at her in that way. It's about time she figured out a way to change his mind, he may not be looking for a happily ever after but Kate is willing to settle for a hot fling before he leaves her and the town behind him once again. Griffin has no idea what's about to hit him but once he's had a taste of Kate he may not find it easy to let her go.

Jill Shalvis never fails to deliver a humorous story with a sweet romance, plenty of laughs along the way and Rumour Has It was no exception. I think it was actually my favourite story in the Animal Magnetism series so far! Kate and Griffin are a great couple, they have a lot of fun together but they also care deeply about each other and encourage each other to follow their dreams. Griffin had no intention of returning to Sunshine permanently, he's been retired from the military due to injuries though so he's come home to lick his wounds and decide what he wants to do with his life. It's also time for him to start building bridges with his father, they've always had a difficult relationship but they need to put the past behind them and find a way to reconnect with each other.

Kate is a really down to earth girl, she's willing to do anything for anyone and she always puts her own dreams at the bottom of the list. She's a bit of a geek and she has a tendency to blurt out random facts when she's nervous which was hilarious. I just loved her character, she's so easy to relate to and the kind of girl I can easily imagine being friends with. I loved seeing Griffin encourage her to put herself first for a change though, he is the one who pushes her into thinking about what she really wants from her future and I enjoyed seeing her spread her wings a little and learn to let her family stand on their own two feet. The couple both have their issues but over all their relationship is fairly drama free and runs quite smoothly which makes it a really fun and light hearted story. I read the whole book with smile on my face and enjoyed every minute of it. I can't get enough of this series, or anything that Jill Shalivs writes really, she is the queen of small town contemporary romances and will always be a go to author for me.