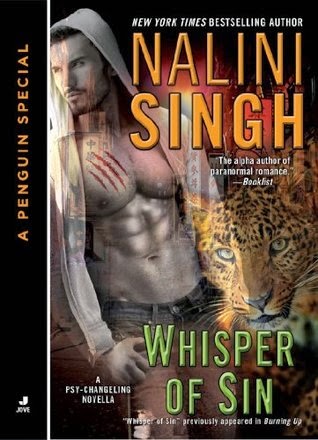 New York Times bestselling author Nalini Singh returns to her phenomenal Psy-Changeling world as a woman in peril finds herself in the arms of a dangerously beautiful shapeshifter . . .

San Francisco is under threat from a violent gang…a gang that has no idea who they’re challenging. The DarkRiver pack of leopard changelings has already claimed the city as their territory, and they will fight with wild fury to protect its residents. Emmett, a lethally trained leopard soldier, isn’t about to let outsiders muscle in on his home ground—especially when they target a human named Ria.

Emmett has one word for the smart stranger with her curvy body and tough spirit: mine.

Possessive, dominant, unyielding in his demands and desires, Emmett is unlike anyone Ria has ever before met. But while the sexy leopard changeling makes her body ignite, his kisses molten and his touch addicting, she’s no pushover and she has a few demands of her own. This leopard has met his match . . .

"Please note that Whisper of Sin is a reissue. It was first published in the multi-author anthology, Burning Up. This is the worldwide stand-alone ebook release for those who wanted to buy only this novella from the anthology. For those of you who have Wild Invitation, this novella wasn't in that collection." - Nalini Singh

Review:
Whisper of Sin was previously published in the Burning Up anthology and is also available as a separate ebook. The story is set before events in Slave to Sensation but to be honest I think you'll probably have more appreciation for the characters if you've already familiar with the world building so I would recommend reading at least one book first. Although I've read the whole series now I don't actually remember much about either Emmett or Ria, their names were vaguely familiar but they definitely haven't been major players in the series so it's a testament to Nalini Singh's writing that she was able to make me care so much about both of them in less than 90 pages!

Events take place at a time when the DarkRiver leopards are only just solidifying their claim over San Francisco, the Psy still think they are in charge but the leopards are definitely claiming territory and part of that claim comes a duty to protect the citizens who live within their boarders. Unfortunately a gang of human thugs seem determined to muscle in, something that DarkRiver will not stand for, not if they don't want to lose face and risk a territory dispute with other packs of predatory changelings. When human Ria is attacked on her way home she is rescued by Dorian and Emmett and the pack take her whole family under their protection. Emmett has more than Ria's safety on his mind though, he immediately recognises Ria as his mate and he will do whatever it takes to convince her to take a chance on him.

I thoroughly enjoyed this novella, Ria and Emmett's courtship is so sweet but I also love the fact that Ria is strong enough to stand up to Emmett and won't let him push her around even though he's obviously so much stronger than her. The banter between them was great but Ria's grandmother was absolutely hilarious and she made me giggle out loud more than once. The rest of Ria's family aren't so keen on Emmett to start with but he isn't the kind of guy to give up without a fight and it doesn't take him too long to win them around. This is a lovely little edition to the Psy-Changeling series and I'm sure fans will devour it.