Review: Mine to Possess - Nalini Singh 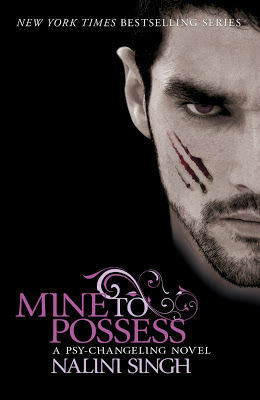 Clay Bennett is a powerful DarkRiver sentinel, but he grew up in the slums with his human mother, never knowing his changeling father. As a young boy without the bonds of Pack he tried to stifle his animal nature. He failed . . . and committed the most extreme act of violence, killing a man and losing his best friend, Talin, in the bloody aftermath. Everything good in him died the day he was told that she, too, was dead.

Talin McKade barely survived a childhood drenched in bloodshed and terror. Now a new nightmare is stalking her life - the street children she works to protect are disappearing and turning up dead. Determined to keep them safe, she unlocks the darkest secret in her heart, and steels herself to ask the help of the strongest man she knows . . .

Clay lost Talin once. He will not let her go again, his hunger to possess her is a clawing need born of the leopard within. As they race to save the innocent, Clay and Talin must face the violent truths of their past, or risk losing everything that ever mattered.

Review:
Tally and Clay grew up together and were the best of friends from the moment they met until the day Clay killed her abusive step-father after discovering what he was doing to Tally. Clay was sent to juvie and Tally was so traumatised by the event that she begged her social worker to tell Clay she had died so he wouldn't come looking for her when he was released. Now Tally's job involves helping at risk children and when those in her care start to disappear in mysterious circumstances she can only think of one person to turn to for help. Clay is shocked when Tally returns from the dead and he is hurt by the way the person he has always loved the most is now so scared of him but now that Tally is back in his life he will do anything to keep her there. There is no way he's going to let her slip through his fingers for a second time and will do whatever it takes to prove he would never hurt her. As they investigate the disappearances it quickly becomes clear that there is more going on than meets the eye but can they figure out who is behind the murders and find a way to rescue the last boy who was taken before he is killed too?

I have become a huge fan of the Psy-Changeling series since I started reading it and I love the way the world is getting more detailed and complex with every instalment. Each book answers some of my questions but leaves me with new ones and I can't get enough of the characters or the world. It's great that we get to see how previous couples are getting along and also that we are slowly being introduced to more and more members of the DarkRiver and SnowDancer packs. Nalini Singh has a way of making you feel invested in the lives of all her characters, even the ones you don't know very well, which is one of the things that makes these books quite so addictive.

I have to admit that I found Tally a little irritating at times, the way she was so terrified of Clay and kept flinching whenever he even looked at her made me really angry when all he has ever done is love and protect her. Then as you start to find out more about her background and the things she went through as a child her actions become more understandable, I still didn't like the way she treated him but I could at least see why she behaved the way she did. She was terrified of putting her trust in him and ending up getting hurt again and for someone who has known pain and hatred since she was 3 years old that was bound to have an effect on her. When she starts to open up to Clay more I began to like her and I have to say I enjoyed the banter between them and the way she wasn't too scared to tease him even in front of other members of the pack.

Clay was an easy guy to love, he is a respected member of the DarkRiver pack and has the trust and love of everyone around him. They are all protective of him and worry that Tally isn't good for him but once they see how much he cares for her and that she feels the same way about him they are quick to welcome her into their family. Clay is the kind of guy who will do anything to protect those he loves, he is loyal, loving and kind but he can also be arrogant and domineering. His animal side is always quite close to the surface which can make him come across as quite scary at times (you definitely wouldn't want to be on his bad side!) but around Tally he is actually a big softy. The things he says to her just melted my heart and left me with a smile on my face.

Mine to Possess is another fantastic instalment to the Psy-Changeling series, I seriously don't think Nalini Singh could write a book that I didn't love! This is a series that needs to be read in order because the world building is too complex to skip around without missing half of the ongoing plot but it is well worth investing the time needed to read these books. I can't get enough of them and I'm looking forward to reading the next instalment asap.