I was thrilled when Sarah Alderson invited me to take part in the blog tour to celebrate the release of the latest novella in her Lila series. I was even more excited when she offered me the opportunity to interview Alex who is one of my FAVOURITE YA book boyfriends! I have had a major crush on Alex ever since I first "met" him in Hunting Lila so I couldn't pass up the opportunity to get to know him better!

Before I get to the interview let me give you a bit more information about Tormenting Lila. This is a fabulous novella that is set a couple of months after the ending of Losing Lila and of course features our favourite couple Alex and Lila. We also get to see some other familiar faces and meet some exciting new characters which I really enjoyed. I'll be posting my review of the story tomorrow but in the meantime you can check out the blurb below: 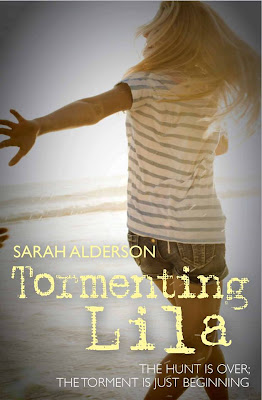 When Lila and Alex sneak off for a romantic weekend away, Lila’s hoping she’ll finally have a chance to work on Alex’s resolve.

But just as things start heating up news reaches them of a serial killer at loose on the island and it isn’t long before their intimate weekend away is interrupted.

A mind reader, a projector, a protective older brother and a serial killer. One of them is going to find Lila first. She's hoping it's the serial killer.

Hi Alex, I'm thrilled to welcome you to my blog today. I'm a big fan of both you and Lila and I know I'm not the only one, in fact I'm sure there are a lot of people who will be eager to get to know you a better!

Can you tell us a bit about your family?
My dad is Swedish and my mother is American. My father worked at the Swedish Embassy in Washington as a diplomat and my mom worked in PR. They moved to Stockholm after I finished High School and went off to college.

How did you first meet Jack and Lila?
I met Jack on our first day of first grade. I met Lila a few weeks later I think when I came around to play baseball in Jack's yard.

What is your earliest and / or favourite memory of Lila?
Earliest memory? I do have a very funny memory of her trying to copy Jack and I when we were hanging upside down from a tree in their yard. She wanted to show us anything we could do she could do too. Except she forgot to put on any underwear.

Favourite memory of Lila - now that would be telling. First night we spent together at that hotel in Tulum was pretty special. I liked watching her lighting up Sterling Enterprises too. She kicked ass.

At what point did you realise that Lila was the one for you?
Probably on my birthday. That night at Belushi's when she walked in wearing this blue dress. She - yeah - when I looked up and saw her and she started walking towards me it took every ounce of willpower not to walk towards her and kiss her right there in front of everyone. But I still wasn't 100% sure how she felt. Then that same night I found out she was a psy and for a while I didn't know what to think.

Were you worried about how Jack would react to you and Lila becoming a couple? Did you think it would cost you your friendship and was that a price you were willing to pay?
Absolutely. I mean, Jack's always made it clear to boys that Lila's a no-go zone, even when she was eight. So I knew I was in trouble when she came back and I realised I was falling for her. I thought it might cost me our friendship but I also knew that I wasn't going to let it. Jack blows his fuse but I knew he'd come around eventually. He's just protective of her, but so am I.

How did you feel when you found out about Lila's abilities and now you know about them do they scare you?
She'd kill me if I said they scared me. They did. When she wasn't so in control of them. And don't forget I've been on the receiving end a few times. Now she's much more confident.

What is the most romantic thing you have ever done for Lila and that she has ever done for you?
Dressed up as nurse. Her that is. Just messing. Um, probably whisking her off for a romantic weekend in Nantucket. Though that got interrupted. Other than that we had some pretty memorable times sailing in the Mexican gulf. There are a lot of hidden away beaches. We managed to sneak in some night time skinny dipping.

The most romantic thing she's ever done for me? That would be telling. The valentine's card when she was about seven was pretty cute.

What plans do you and Lila have for the future?
We're just trying to figure out where we're going to be based. San Francisco or Boston. A lot depends on where her parents decide to move to. I'm applying to college and Lila's got a year left of High School.

Thanks so much for taking the time to answer my questions, I hope you and Lila continue to be happy together and I'm keeping my fingers crossed that you'll be sharing more of your story with us in the future!

Well I hope you enjoyed getting to Alex better. Make sure you follow the blog tour for some more fabulous character interviews. You can find all the posts at the following blogs:

Sarah Alderson is also hosting a fabulous tour wide giveaway that fans of the series are NOT going to want to miss out on! Not only can you win a signed copy of The Sound and a sneak peak of the new X-rated novella about Alex and Lila that isn't due to be published until 2014 but you can also win the chance to be Alex's girlfriend!!! Unfortunately you won't be replacing Lila but Sarah is planning on writing a prequel story set when Alex and Jack were at college and the winner will get to have Alex's girlfriend at the time named after them.

To enter the giveaway you need to go to Sarah's Facebook page HERE and fill in the rafflecopter form.
at 10:00