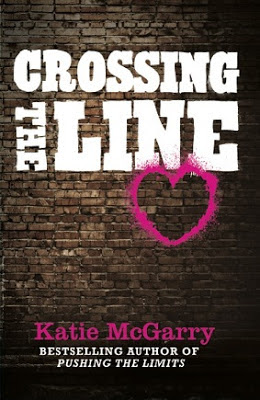 Lila McCormick first met Lincoln Turner when tragedy struck both their lives. But she never expected their surprise encounter would lead to two years of exchanging letters-or that she'd fall for the boy she's only seen once. Their relationship is a secret, but Lila feels closer to Lincoln than anyone else. Until she finds out that he lied to her about the one thing she depended on him for the most.

Hurting Lila is the last thing Lincoln wanted. For two years, her letters have been the only thing getting him through the day. Admitting his feelings would cross a line he's never dared breach before. But Lincoln will do whatever it takes to fix his mistakes, earn Lila's forgiveness-and finally win a chance to be with the girl he loves.

Review:
I loved Pushing the Limits when I read it last year so when I heard that Katie McGarry had written a novella about Echo's friend Lila I couldn't wait to get hold of a copy. Then I found out it was going to be available as a free ebook which just made my day - I love it when authors give their fans little extra glimpses into the lives of their characters or let side characters have a chance to shine in their own stories. I have to admit it's been a while since I read Pushing the Limits so I couldn't remember a great deal about Lila, just that she was the only friend who stuck by Echo through thick and thin, so I was interested to learn more about her and hopeful that we might get a glimpse into how things are going for Echo and Noah. Although the previous couple get a brief mention the stars of Crossing the Line are definitely Lila and Lincoln, they turned out to be a great couple and my only complaint is that I wanted more of their story. I would love it if the author would revisit them both in the future but considering this was a free read and only contains about 60 pages I think she did a great job of getting me to care about their relationship.

I'll admit that when Lila was first introduced she came across as a little too wimpy for my taste, she is staying in her house alone for the first time while her family are on holiday and she is terrified by every little noise she hears. I felt that the way she was so nervous made her seem younger than she was but to be fair if I think back to myself at a similar age I was probably just as nervous the first time I stayed in the house on my own and I didn't have someone playing tricks on me at the time. What I did really like about her was the way she found her confidence again by the end of the story, with Lincoln's help she discovered her backbone and I had to respect her for that. Lincoln has made some mistakes and has hurt Lila by lying to her but he regrets his actions and is determined to do something to make things right between them. He is a great guy but with everything he has going on at home right now it is no wonder he struggled to cope with the pressure and I'm not at all surprised that something had to give. He has a plan to fix things though and with a lot of hard work I'm sure he can pull it off.

I loved the fact that these two started as pen pals and became such good friends even though they hadn't seen each other for over 2 years. I think there is something special and so much more personal about a hand written letter over text and email so I really loved that aspect of the story. The POV alternates between chapters and each one begins with a snippet of one of the letters they have sent to each other. That allows the reader to get a sense of the history between them and to see how well they know each other. They have a strong connection and are able to tell each other things that they can't share with anyone else and as they have become close they have started to develop feelings for each other. Now that they are finally face to face again they are both wary of taking the next step but know if they don't at least try they will always regret it.

Crossing the Lines is a sweet story and I thought Lila and Lincoln were a really well matched couple. They bring out the best in each other and they have great chemistry even though they are taking things slowly. I would love to revisit this couple in the future to see if Lincoln managed to fix his mistake and find out how Lila is getting on in Florida. Fans of Pushing the Limits are sure to enjoy Crossing the Lines and it's just made me even more eager to read Dare You To.

Source: I downloaded this from Amazon as a free Kindle ebook.