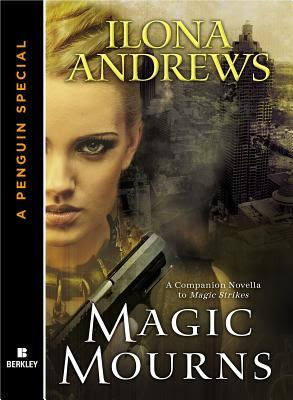 Kate is on medical leave and Andrea is sitting in her office. Everything is going well, until a a giant hell dog escapes the Underworld and Raphael, the smoking-hot and very persistent werehyena, asks Andrea to help him track it down . . .

This novella was originally published in the Must Love Hellhounds anthology but has since been released separately as an ebook.

Review:
Magic Mourns is available to purchase as an ebook novella but was also included in the Must Love Hellhounds anthology. The story is set after Magic Strikes while Kate is still recovering from her injuries and taking a break from her duties for the Order of Knights so her friend Andrea is standing in for her. When Andrea gets a call from a member of the public concerned that a shapeshifter is in danger she gets more than she bargains for when she goes to investigate. Not only does she come face to face with a giant hellhound but she is also forced to work closely with Raphael, the werehyena she has been trying to avoid ever since she realised he had feelings for her.

I have been a fan of Andrea since she first appeared in the series, she always makes such brilliant snarky comments and her interactions with Kate never fail to make me smile. I loved getting to see her take a leading role and this has me even more excited to read the full length novel that is told from her point of view (Gunmetal Magic). Andrea is just as kick ass as Kate but in a different way, where Kate excels with a sword Andrea is more comfortable with guns - the bigger the better. It's a good job she's a crack shot because her skills are certainly put to the test in this story. This may only be a novella but it packs a lot in and I really enjoyed seeing Andrea start to come to terms with her past and accept herself and her abilities.

I have to say I really started to fall for Raphael during this story, I've always liked him and found him amusing but this was the first time I really felt the chemistry. He is such a sweetie when it comes to Andrea, she has been pushing him away for a long time now because she is scared of getting hurt but now he finally has her full attention he goes all out to prove that she can trust him. I love the way he acts towards her and think they make a great couple so I'm all for seeing more of them together in the future.

I'm not going to talk about the plot because it would be too easy to spoil this novella but I will tell you that it has everything you'd expect from one of Ilona Andrew's full length books just wrapped in a shorter package. There is plenty of action, a lot of humour and some fab banter between the main characters. Don't expect to see much of Kate though, she only makes a very brief appearance as this is very much Andrea and Raphael's story. A very worthy addition to the series and a story that fans aren't going to want to miss, my only complaint is that I wanted more!