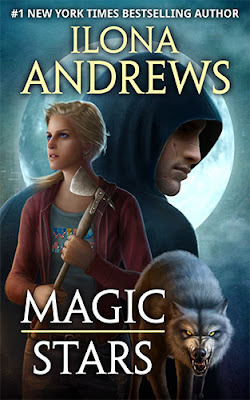 Scarred, solitary Derek Gaunt has separated from his Pack, and is truly a lone wolf. With no family he answers to no one; but is fiercely loyal to a chosen few. So, when several of those close to him are murdered, he’ll stop at nothing to hunt their killer through the magic-drenched streets of Atlanta.

Never one to be left on the sidelines, equally determined—some might say stubborn—Julie Lennart-Olsen soon joins in his pursuit; and what began as revenge turns into a race to save the city. Their search pits them against powers they never imagined and magic so old, it predates history. It may cost Derek his life, but there are things for which even he would risk everything.

Review:
It's no secret that I'm an Ilona & Gordon Andrews fan girl, I adore all of their books but I'm especially addicted to the Kate Daniels series. Derek has always been one of my favourite side characters and I love Julie too so the second I found out about this novella it jumped straight to the top of my most wanted books pile. As fans of the series will know most of the novellas aren't essential and can be skipped if you only want to read the full length books (although why anyone would want to skip ANYTHING by this couple is beyond me!) but I'd say that's definitely not the case with Magic Stars. We get a lot of insight into the series as a whole in this story and it's well worth reading even if you don't usually read novellas or short stories.

This may be set in the Kate Daniels world but it's definitely Derek and Julie's story and it's told from his point of view. Finally we get a chance to be inside the head of the wolf who stole our hearts in the first book of the series and I loved every minute of it. I'm going to assume that anyone reading this review is already familiar with the series and is up to date with the full length books (as far as Magic Shifts which is the most recent release) so please be aware that beyond this point you may come across spoilers if you're behind on the series.

I'm sure we all remember the Derek we first met, the one who was funny, handsome, charming, who could talk his way out of any kind of trouble and who women of all ages couldn't help fawning over. He hasn't been that happy go lucky boy for a long time though and I've been getting increasingly concerned for him as the series has continued. Getting tortured and having your looks destroyed is bound to change a man and Derek has lost his joy of life, his wolf is closer to the surface than ever and he's very lucky he didn't end up going loup. It's kind of heartbreaking being inside Derek's head, from Kate's point of view he's only ever been the boy she loves and although we know he is scared and damaged she's never made a big deal out of it, but Derek has all kinds of issues with the way things are now, especially the way other people treat him because of it.

I don't want to talk too much about the plot of Magic Stars so instead I'll focus on how much I loved seeing Derek and Julie working together, I've loved them both from the beginning but I always thought of them as more like brother and sister than potential love interests but I have to say I think I might be shipping them now. Julie is still a little young for anything serious but I definitely want to see more of them working together and who knows what the future might hold for the pair. I love seeing how far Julie has come from the young girl we first met and through her we get a little more insight into Roland and what he's currently up to. It was also really interesting to see how Kate's magic is effecting Julie and her abilities too and I think that's going to have a big impact down the line.

For such a short story Magic Stars sure packs a lot in, there's plenty of action and a lot of character development that you really don't want to miss. This has made me more eager for Magic Binds than ever but it's also made me desperate for more books starring Derek. The fact that this is listed on Amazon as Grey Wolf book 1 gives me VERY high hopes that we might have a spin off series to look forward to and that would be absolutely perfect!