Review: What a Dragon Should Know - G.A. Aiken 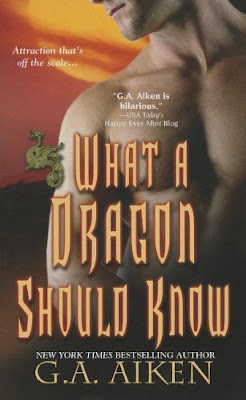 Only for those I love would I traipse into the merciless Northlands to risk life, limb, and my exquisite beauty. But do they appreciate it? Do they say, "Gwenvael the Handsome, you are the best among us--the most loved of all dragons?" No! For centuries my family has refused to acknowledge my magnificence as well as my innate humility. Yet for them, and because I am so chivalrous, I will brave the worst this land has to offer.

So here I stand, waiting to broker an alliance with the one the Northlanders call The Beast. A being so fearful, the greatest warriors will only whisper its name. Yet I, Gwenvael, will courageously face down this terrifying. . .woman? It turns out the Beast, a.k.a. Dagmar Reinholdt, is a woman--one with steel-gray eyes and a shocking disregard for my good looks. Beneath her plain robes and prim spectacles lies a sensual creature waiting to be unleashed. Who better than a dragon to thaw out that icy demeanor?

And who better than a beast to finally tame a mighty dragon's heart?

Review:
This series is pure unadulterated brain candy, it doesn't take itself too seriously and G.A. Aiken consistently gives us slightly silly but very, very funny stories about overbearing alpha dragons and the warrior women who tame them. I've always loved reading about dragons and that is probably one of the reasons this series appeals to me so much but I also love the family dynamics and the crazy characters this series has introduced us to.

I've been waiting to read Gwenvael's story since the moment we first met him, he's the most light hearted of the brothers and the one who is always ready to lighten the mood with a joke or a silly comment. As a result of that nobody ever takes him seriously though so when Annwyl gives him a task to gather information from the Beast of the north he is determined to prove how capable he really is. The last thing he expects when he arrives at the home of the Northlanders is to discover that the Beast is in fact a woman but Gwenvael is known for his good looks and luck with the ladies as much as for his sense of humour so he isn't worried about his chances of success. Unfortunately for him Dagmar is the one woman who doesn't immediately fall for his charms and she isn't going to be easy to convince.

I knew I was going to love Gwenvael so I wasn't surprised to find that he is my favourite of the dragons we've met so far. He's just such a sweet guy and I love that he's less overbearing than his brothers. Dagmar may not be a fighter like Annwyl but she is more than capable of standing up for herself, she comes from a huge family but learnt from an early age how to talk her father and brothers into doing pretty much whatever she wants so she has been running her household for years without them even noticing. She has information that she knows Annwyl will find useful but she wants to deal directly with the Queen not her messenger boy. I enjoyed the banter between these two and the way Dagmar managed to keep Gwenvael on his toes, he's definitely not going to have an easy quiet life with her by his side!

It was also great to catch up with the previous couples and we're introduced to a whole new set of dragons who I think are going to be an interesting addition to the series. These books are a lot of fun to read and I'm glad I still have quite a few books to read before I'm caught up with the series.