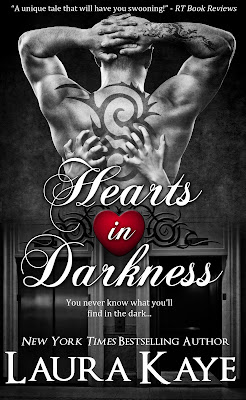 Makenna James thinks her day can't get any worse, until she finds herself stranded in a pitch-black elevator with a complete stranger. Distracted by a phone call, the pin-striped accountant catches only a glimpse of a dragon tattoo on his hand before the lights go out.

Caden Grayson is amused when a harried redhead dashes into his elevator fumbling her bags and cell phone. His amusement turns to panic when the power fails. Despite his piercings, tats, and vicious scar, he's terrified of the dark and confined spaces. Now, he's trapped in his own worst nightmare.

To fight fear, they must reach out and open up. With no preconceived notions based on looks to hold them back, they discover just how much they have in common. In the warming darkness, attraction grows and sparks fly, but will they feel the same when the lights come back on?

Review:
I'm a huge fan of Laura Kaye's writing and I've heard amazing things about Hearts in Darkness so I'd actually bought a copy of this book a couple of years ago but for some reason I'd never got around to reading it. I'm not even sure why I put it off for so long because I was expecting to enjoy it but I think I kind of liked knowing I had a fab book tucked away ready for a rainy day when I might need it. Then I found out that Laura is releasing a sequel in the new year so I decided it was about time to dive in and now I'm kicking myself for not getting to it sooner because I absolutely loved this story. Considering the majority of the book is about two strangers trapped in a pitch black elevator together waiting for the power to come back on I'm kind of surprised by how fabulous it was!

Makenna was digging for her phone while rushing to catch the elevator so she wasn't paying attention to the person who held the door open for her and all she saw of Caden before the lights went out was a tattooed hand. Caden just saw a mountain of shopping bags and a flash of gorgeous red hair before everything went dark and his claustrophobia sent him into a panic. It's only the sound of Makenna's voice that helps him push back his fear so he urges her to keep talking and help take his mind of things. The longer they are trapped together in the dark the more they realise how much they're enjoying each other's company but will the magic persist after the lights come back on and they get to see each other for the first time?

Hearts in Darkness sucked me in from the first page, I fell in love with both of the characters and I really enjoyed spending time watching them get to know each other. Caden is the kind of guy who looks tough, and possibly a little scary, at first glance with his shaved head, tattoos and multiple piercings but he's actually incredibly sweet and has a heart of gold. He's the kind of guy I'd be happy to get stuck in an elevator with that's for sure! Makenna looks a lot more conservative but is actually really friendly, outgoing and a little bit of a tomboy. They aren't the first couple you'd put together based on looks but in terms of personality and their outlook on life they fit really well.

I love that while they're so different on the surface they actually have a lot in common and you could really feel the emotional connection between them. I guess I just liked the whole idea of getting to know someone without looks playing a part in the equation and I thought Laura Kaye did a fantastic job of building up the heat between them even when they both had no idea what the other one looked like. I'm really excited that these characters are going to get a sequel too, I loved the romance and we did see a little of them after they got out of the elevator but I definitely want more and I'm looking forward to seeing them as a couple in a normal situation. Love in the Light is right at the top of my January wish list and I know for sure I'll be rereading Hearts in Darkness while I wait for it to release.