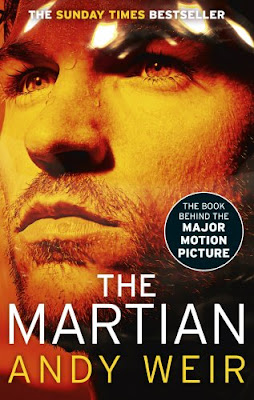 I have no way to communicate with Earth.

I'm in a Habitat designed to last 31 days.

If none of these things happen, I'll eventually run out of food and starve to death.

Review:
Mark Watney is part of a six man mission to Mars, the plan is to spend thirty days on the planet carrying out various experiments but just six days into the mission a major storm changes their plans and they have to evacuate. Unfortunately Mark has an accident as they're leaving and the others, presuming he's dead, are forced to leave him behind. Now Mark is trapped, completely alone on a planet over 50 million miles from home with no way to contact Earth. He's in a habitat that's only designed for short term use and he only has enough supplies to last a year (and that's if he rations them!). That might not be so bad if the next mission from Earth wasn't four years away but as things stand he's completely screwed.

What follows is a bit like Robinson Crusoe on Mars only Mark's chances of survival are much, much lower, in fact he's facing pretty impossible odds whichever way you choose to look at things. The good news is that Mark is well trained, he's a mechanical engineer and a botanist which might just save his life. If Mark can figure out a way to grow crops on a planet with no soil he might be able to make enough food to stay alive long enough for a rescue mission to reach him. Of course it's not quite as simple as that and there are lots of other issues to deal with but food has got to be one of the top priorities.

The Martian is one of my favourite books of 2015, I wanted to read it after seeing trailers for the movie but I had no idea how much I'd end up loving it. Mark's story captured me from the very first page and I absolutely devoured it. The main part of the book is told in the form of Mark's daily mission logs but as we get further along and people on Earth realise he survived the initial accident we start to see what's happening at the NASA base and how they are doing their best to rescue him. It's funny because The Martian is quite a science heavy story which isn't usually the kind of thing that appeals to me but the science is told in such a straightforward and personable manner that I didn't find it at all overwhelming. In fact I was just fascinated by Mark's thought processes and the various tasks and goals he set himself in order to survive.

Mark's a great narrator, he's in this horrendous situation with very little chance of actually surviving but he still manages to keep his sense of humour and I was surprised how many times I laughed while reading this book. Nothing quite goes to plan for him though, every time he solves one problem and thinks he has things figured out something will happen that throws everything back up in the air again. Mars is an incredibly hostile environment and I think the planet is trying to tell him something - humans just aren't meant to survive out there.

Considering I picked this book up on a whim to read before the movie came out I'm still surprised by how much I loved it but it's a story I'd recommend to everyone. There was just something about it that completely caught my attention and I loved every minute of it. While I'm on the subject of the movie I thought they did an excellent job with the adaptation. Obviously it doesn't follow the story 100% but movies never do, it included all of the major plot points though and more importantly it captured the feel of the book. The special effects are phenomenal and I loved Matt Damon's portrayal of Mark. Both the book and the movie are well worth checking out, personally I'd recommend reading the book first but I think that pretty much goes without saying!

Just in case I haven't convinced you here's the movie trailer to really catch your interest.

Other reviews of this book:
Hot Listens
If you have reviewed this book on your blog please leave a link to your review in the comments & I'll add the link here.