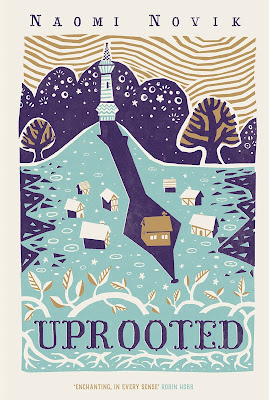 Agnieszka loves her valley home, her quiet village, the forests and the bright shining river. But the corrupted wood stands on the border, full of malevolent power, and its shadow lies over her life.

Her people rely on the cold, ambitious wizard, known only as the Dragon, to keep the wood's powers at bay. But he demands a terrible price for his help: one young woman must be handed over to serve him for ten years, a fate almost as terrible as being lost to the wood.

The next choosing is fast approaching, and Agnieszka is afraid. She knows - everyone knows - that the Dragon will take Kasia: beautiful, graceful, brave Kasia - all the things Agnieszka isn't - and her dearest friend in the world. And there is no way to save her.

But no one can predict how or why the Dragon chooses a girl. And when he comes, it is not Kasia he will take with him.

From the author of the Temeraire series comes this hugely imaginative, engrossing and vivid fantasy novel, inspired by folk and fairy tales. It is perfect reading for fans of Robin Hobb and Trudi Canavan.

Review:
I absolutely adore Uprooted, in fact I think it's probably my favourite book of the year, but it's taken me a long time to write my review. You know how you feel when you discover an amazing book, a book that you want to run out and place in everyone's hands so that they can all enjoy it as much as you did? That's how I feel about Uprooted but I just don't seem to have the right words to do it justice so hopefully me saying that I've already read it twice and yet I'm still tempted to pick it up and start all over again should give you a bit of a clue.

Agnieszka lives in a small village surrounded by a dark and dangerous Wood where all kinds of terrible creatures prey on anyone who gets too close. They, and their neighbouring villages, are protected by a powerful sorcerer known only as the Dragon but they pay a high price for his services. Every 10 years the Dragon chooses a village girl to go and live with him, the girls aren't harmed but they come home different, both highly educated and more cultured than before they find themselves unable to fit back into village life. The Dragon gives them all a large dowry and most of them choose to move to the city to study or start their own businesses and are never seen again after a short visit to say goodbye to their families. Now the time has come for the Dragon to choose his new companion and everyone knows that Agnieszka's best friend Kasia will be picked. Kasia is the most beautiful of all the girls in the right age group and everything that the Dragon usually looks for so it comes as a huge shock to everyone when Agnieszka is taken instead.

I don't want to talk about why Agnieszka was chosen instead of Kasia and I'm not really going to go into much detail about the plot from this point onwards but what follows is a fabulously dark and kind of twisted fairytale. Naomi Novik writes so beautifully and she brings the Wood vividly to life so you can practically feel the evil lurking inside seeping through the pages. The characters are fantastic and there is a wonderful slow build romance bubbling along in the background but that isn't the main focus of the story which is probably why I enjoyed it so much.

The Dragon is quite cold and standoffish, he's not nasty but he has lived for 150 years and seen many people come and go in his life so he doesn't allow anyone to get close to him. He's good at keeping his distance and doesn't socialise with anyone, instead he focuses all his energies on studying magic. He likes things controlled and organised, he has set routines and he wants to understand how everything works. Agnieszka is his opposite in so many ways, she is chaos incarnate and absolutely hopeless at keeping things neat and tidy. She does everything by instinct and she cares deeply about the people around her. At first you think they'll never be able to see eye to eye but their different styles are surprisingly complementary and together they can achieve much more than they ever could have done alone. I loved seeing them get to know each other and the gradual trust that builds between them, it's not easy but a common enemy unites them and turns them into a team.

Uprooted is just a fantastic story, the world building is rich, the writing evocative and it will capture you from the very first page. Naomi Novik has created a fantasy story with a real fairy tale feel to it and it's one that will stay with me for a long time to come. I can't believe that this is my first time discovering this author and I know I'll be reading a lot more of her books in the future.