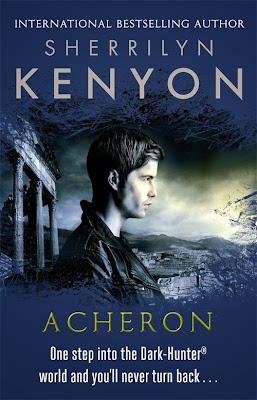 Eleven thousand years ago a god was born. Cursed into the body of a human, Acheron endured a lifetime of hatred. His human death unleashed an unspeakable horror that almost destroyed the earth. Brought back against his will, he became the sole defender of mankind.

For centuries, he has fought for our survival and hidden a past he never wants revealed. Now his survival, and ours, hinges on the very woman who threatens him.

Review:
I have waited such a long time for Ash's story, he's been a firm favourite of mine from the beginning of the series so my expectations for his novel were incredibly high but I was slightly nervous to start this book. I needn't have worried though, Acheron was everything I could possibly have hoped for and then some.

From the glimpses we've seen of Ash's past I knew this wouldn't be the easiest book to read and I was right because there are times when it is absolutely heartbreaking. This is almost like two books in one, the first half focuses on Ash's human life and how much he suffered after being rejected by his parents thanks to his unusual eyes. Much of this part of the story is told from the point of view of Ash's sister Ryssa, she was the only one who loved her brother and she tried so many times to save him but it seemed like everything she did to try and help ended up dooming him to even further torture. I don't think I've ever hated fictional characters as much as I hate Ash's family and it was appalling witnessing everything that Ash went through.

I've always wondered why Ash puts up with Artemis and the way she treats him but after seeing their early interactions and how their relationship progressed through the centuries I now completely understand his side of things. I hate Artemis more than ever and I really hope we get to see her die a very slow and painful death at some point in the series, but I understand why Ash lets her treat him the way she does. It's his loyalty to the other Dark-Hunters that keeps him by her side and you have to admire him for the way he willingly puts himself through hell to protect them.

The second half of the book still has it's painful moments but it's more like the rest of the books in the series, there are some lighter moments and the romance is incredibly sweet. I'm not going to mention the heroine by name because I think it's nicer going into this book not knowing, I will say that it's someone we've met briefly before and although I was initially surprised she was matched with him it didn't take me long to come around to the pairing. I loved the way she saw beyond the surface and wanted to take care of Ash the way he always takes care of other people. She was willing to take risks and make sacrifices to be with him and he needed a woman who was going to put him first and prove that he was worthy of being loved. There was very little in the way of drama between the two of them but there were so many external conflicts that I'm glad they recognised something special in each other so quickly.

Of course Ash is a major part of all of the Dark-Hunter's lives so we get to catch up with a lot of familiar faces which was great. I loved seeing how surprised everyone was to see Ash acting all possessive over a woman. I also really enjoyed seeing more of Simi who has always been another favourite character, baby Simi is utterly adorable and I love the father/daughter bond she shares with Ash.

I'm not going to lie, this book was incredibly hard to read at times, the things Ash has suffered don't even bear thinking about, but it really shows what an amazing guy he is to come through all that and still feel compassion for others. Ash could have been eaten alive by bitterness and hatred and while he does feel those emotions he also has a great amount of respect and love for others, especially those weaker than him, he's the kind of guy who goes out of his way to help people in need and seeing just how much good he does made me love him even more. Acheron was a book that is worth waiting for, it was my favourite in the series by a long shot and I'm very curious to see how certain things are dealt with in future books now that Ash has broken a few long standing ties. I think things are going to get very interesting with a certain heifer-goddess from here onwards and I'm still praying we get to see her taken down in the not too distant future. Personally I'd be up for handing Simi the barbecue sauce and letting her deal with the problem but I'd be a bit worried that she'd end up with an upset stomach!