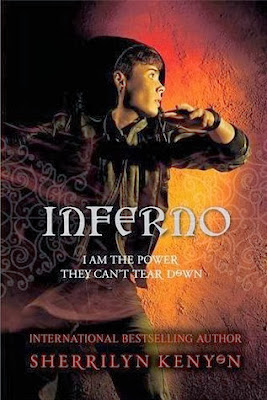 I control my destiny and my life.
Nothing controls me.
Ever.

Turning sixteen isn't what Nick Gautier thought it would be. While other boys his age are worried about prom dates and applying for college, Nick is neck deep in enemies out to stop him from living another day. No longer sure if he can trust anyone, his only ally seems to be the one person he's been told will ultimately kill him.

Those out to get him have summoned an ancient force so powerful even the gods fear it. As Nick learns to command and control the elements, the one he must master in order to combat his latest foe is the one most likely to destroy him. If he is to survive the latest round, he will ultimately have to sacrifice a part of himself.

Review:
Inferno is the fourth book in Sherrilyn Kenyon's Chronicles of Nick series so this review may contain spoilers for previous books. I'm going to assume that anyone who reads beyond this point is up to date with the series so look away now if you're not!

Poor Nick doesn't have the same worries as most sixteen year old boys, instead he has the weight of the world on his shoulders knowing that he has to change his future so he doesn't kill everyone he has ever met and cared about. As if visits from his future self weren't enough to cause him stress he has just discovered that his girlfriend was sent to assassinate him and there is also a mysterious entity who is set on destroying both him and his father so they can claim the Malachai powers for themself. Heartbroken by Kody's betrayal Nick has to decide who he can really trust to have his back when he needs them.

I started reading the Chronicles of Nick series before Sherrilyn Kenyon's adult Dark-Hunters series but since I have recently started to devour her adult books I find I'm enjoying this series even more. I'm still only about 6 books into the Dark-Hunters series but getting to know Kyrian, Asheron, Simi and the others has just made me appreciate the appearances their characters made in Inferno even more than usual. Ash has definitely become a firm favourite but Simi never fails to add humour to the story and I loved her interactions with Nick in this book. It was also great to see Ash from Nick's perspective and I really like how Ash is always there when Nick needs him.

I felt that Inferno was a slightly slower read than the first three books, it was more character driven, particularly in the beginning, but that's great because we really get to see Nick do some growing up. I also felt like we got to know Caleb and Kody a bit better and find out more about their backgrounds and their motivations for helping Nick. I did find myself slightly frustrated that Nick let himself be caught up by Casey's attention so easily but I guess most teenage guys would have reacted the same if they were approached by a beautiful girl so I'll forgive him just this once.

The pace really picked up in the second half and that's when I found I didn't want to put the book down. There are a lot of interesting revelations, some great fight scenes and some poignant moments between Nick and his friends and family. I still love Nick's interactions with his mother Cherise, it's so sweet to see how much he loves her and how far he will go to protect her from everyone, even himself. Inferno is another great instalment to the series, it ends with a killer cliffhanger that means things are sure to get VERY interesting in the next book, Illusion. I'm just disappointed I'll have to wait until next year to see how it all plays out!